Oh yes, time for another World of WarCraft blogpost!

About a week ago, a friend of mine from the old days sent me a scroll of resurrection to get me back in the game, sort of. For those who don’t know, scrolls of resurrection can be sent out to people who have dormant World of WarCraft accounts, enticing them with some cool rewards to get back into the game proper.

As it stands, I can’t commit the time for an MMO now or in the near future, so my goals for this scroll were quite simple: chill with old friends and enjoy the free week.

Turns out that currently, Blizzard is offering a free mount to people who send out these scrolls of resurrection and is giving people who use them a free upgrade to Cataclysm, the current expansion that is at the end of its life-cyle as a new one is on the horizon, Mists of Pandaria. That really was the biggest draw for me. If you guys remember from my related post last year, Blizzard gave me a free week to get back in the game, be amazed and get the current expansion of the time: Cataclysm. I had some decent fun with the free week but not nearly as much as I could have had since everyone I knew, whether friends or guildmates, were all busy with the top content of the time and no one really had time for an 80 like me.

Sad state of affairs I know. Rather frustrating too.

So yeah, I’ve been tearing it up since my friend sent me the scroll (her motives weren’t all altruistic either since she got a free mount of it hehe) and have been having a fair bit of fun this time.

I was a little too busy staring at the bad guys to take an at-time screenshot so this one will have to suffice!

My Paladin, Vorianloken, has been very busy in one of the newest questing zones, Mount Hyjal, helping the Druids and the Night Elves push back the forces of the Twilight Hammer and save the World Tree Nordrassil from fiery extinction. The most momentous moment of heading up to Hyjal after I zoned in was being confronted by a vision of Deathwing, as well good old Ragnaros from Molten Core. I almost fell out of my chair, it was so unexpected!

After that, I spent about two days leveling up, going from 80-82 in almost no time at all. The XP rewards are quite huge in Hyjal as it turns out. It was all that much faster too since I could now FLY in Kalimdor. Yes, FLY IN KALIMDOR. You heard that right. That would be one of the biggest changes of the expansion apart from all the others. For a measly sum of 200 gold, I could fly anywhere and everywhere in Kalimdor and the Eastern Kingdoms. It is damn awesome! 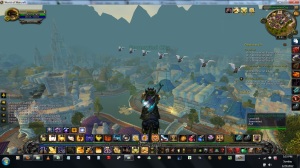 Look at me!! I'm flying in Stormwind!!

Haven’t really seen the sights with it yet, but Stormwind definitely looks way, way different from the air, especially since Deathwing did a big number on it when I broke out from wherever it is he broke out of. I don’t remember the lore on that thing anymore. 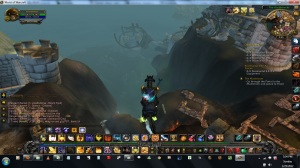 This is where the old Barracks used to be before Deathwing attacked. Oops!

Questing also gave me some time to work on a rotation for my Retribution (DPS) spec, since I have zero idea on how to play the Paladin anymore. Vorianloken is actually a noob now, damn. When I say working on my rotation, what I really mean is that I mashed random buttons together and forgot I had some skills in my skill box that needed to be transferred over to the action bars. Yes, big noob moment. Le sigh.

Yeah... King Varian Wrynn is still an insufferable wretch. A great leader for the Alliance!!

So last night I went to my first instance, hoping to experience what I could of the Cataclysm dungeons, and work on that rotation properly. As much as I hate the attitude on ElitistJerks, the people there DO know what the hell they are talking about and their threads have been fairly helpful to me over the years.

Anyways, the instance I got was Abyssal Halls, a Naga-themed instance that is also packed with the servants of the Old Ones, beings who occupied all of Azeroth before the Titans came and kicked their asses back to nowhere. Disgusting Cthulhu-ish bipeds with octopus-tentacles for a face, the servants of the Old Ones that is. All in all, the instance wasn’t too bad. My gear is pretty darn good since it is all mostly Tier 10-level loot with some best-in-slot items from some lower-level raids (at least, what used to be best-in-slot). Unfortunately, I didn’t have Recount (the DPS-tracker add-on) available at the time so I don’t know how good I actually did but I couldn’t have been too bad, compared to the others in there. No DPS issues at any time, just a Paladin tank wearing some Intellect gear who died a couple times on the second boss because he kept standing in purple stuff.

NOTE to tanks: NEVER EVER STAND IN PURPLE STUFF. THE HEALER WILL LET YOU DIE AND THE DPS WILL TEABAG YOU.

To be fair to that guy, somewhat, I also made that mistake once. I was too focused on my rotation to pay attention. I offer the weak defence that it was my first proper at-level instance in nearly two years and I had no idea what the hell I was doing.

The Stormwind Sky Sentinels, the SSS. Don't mess with those dudes. Maybe.

So anyways, we moved on through the dungeon and finally came to the end boss. Suffered our third wipe of the day, apparently because we weren’t focusing on the right mobs. Well, I had said that I had no idea what the hell to do on the bosses and no one had offered any explanations so I hold myself blameless for that. I could have went to WOWWIKI or WOWHEAD I suppose and looked up the boss fight though I suppose. Meh. Its not really that big of a deal really.

Finally got the boss down on the third try (we wiped again because of the stupid tank who was eventually replaced) and I ended the run picking up two pieces of loot. Got a ring for my Paladin’s DPS set and some intellect item for my non-existent healing spec. I gave up healing sometime during Ulduar in Wrath of the Lich King and haven’t healed raids since, but I did try and keep a roughly up to date healing set. Its probably all bogus by now, what with all the class changes in Cataclysm and what not.

But yeah, good run. Three days of fun and awesomeness.

Goal for my remaining three days is to just run dungeons as much as I can, although I probably won’t get time for more than one or two, since I’m only setting aside about an hour and a half for WoW. Its great to go back to the game after all this time and I’m definitely enjoying myself. I would so, so love to go back to it full-time but between work and my writing and my reading and my reviewing, I just don’t have that much time for it. Regrettable of course, but them’s the breaks.

Anywho, I shall post more stuff by the coming weekend, to give an account of the rest of my time in the game, so stay tuned folks!

Posted on March 25, 2012, in World of Warcraft and tagged Cataclysm, Medivh, Paladin, Retribution, Vorianloken, World of Warcraft, Wrath of the Lich King. Bookmark the permalink. 1 Comment.