← Your Opinion Has Value
Skyrim Parodies →

I mentioned in my April Report that it had been a slightly better month with regards fiction writing when compared to March which was absolutely terrible because of a bad case of procrastination a weird disinterest in getting any serious writing done. With May, I really wanted to change things around as the Black Library submissions window was now hitting the middle of the stretch and I had one deadline in particular looming as well.

Well, May turned out to be much better than I had hoped, and I got some serious work done. I actually came quite close to the levels of work that I had done in January and February. That’s a good thing right? Well, if has certainly buoyed my spirits and given me a great ego boost. I am now more driven than ever to succeed with my writing.

The full lowdown for the month is after the break.

To do a small recap of my goals for the year,

All in all, May was a fantastic month because it ended so well on the writing front. Making solid progress is really motivating. As I mentioned above, I have been developing ideas for a trio of new and exciting projects, one them being a joint effort that I’m working out the details for with a couple friends. The second half of 2012 in that respect is going to be really fun.

In total, the writing for May amounted to about ~39,000 words, which is a huge step up from April’s performance of ~28,000 words. Nearly a thirty percent increase thanks to all the fiction writing I did. The yearly total now stands at ~192,000 words and puts me close to the halfway mark for the year’s goal of 420,000 words, ~46% to be exact! Good times indeed.

May was an awesome month where reading is concerned. I finally got back into the world of comics last month, starting with the excellent Kill Shakespeare Volume 1 by Anthony Del Col and Conor McCreery, and it was as if the floodgates had opened. Lots of comics were read this month and all of them were immensely enjoyable. Its really nice to get back to comics in a way: they are quick reads and you can burn through several issues in a single sitting no problem.

With all the comics I read, my novel reading certainly didn’t suffer at all and I read some fantastic novels as well this month, each as different from the other as possible. The month ended way past target as I hit 97/200 on the challenge counter. Here is the top 3 for the month:

Honourable Mentions – Midnight’s Mask by Paul S. Kemp (the third Erevis Cale novel for Wizards of The Coast), The Chapter’s Due by Graham McNeill (The sixth Ultramarines novel for Black Library), and Wake of The Bloody Angel by Alex Bledsoe (the fourth Eddle LaCrosse novel for Tor Books and is also a standalone in the main).

Looks like Black Library wins out this month! As some of you may have noticed in the last few days, I also have a Reading Awards page now up at the top, where I’ll be posting my top picks for each month, whether novels, audio dramas, comics or novellas. Keep an eye out for updates at the end of each month.

I mentioned in the April Report that May was looking quite great thanks to Matt Forbeck, through whom I’ve been introduced to the various comics series published by IDW Publishing. I really wasn’t disappointed as I started reading his Magic: The Gathering comics last month and continued on this month with the fourth issue for the mini-series. Its been a blast reading this series and I can’t wait for the 27th when Spell Thief #1 hits stores, continuing the story of Dack Fayden.

I’ll also be looking to read more comics this month as I have managed to amass quite a reading pile thanks to NetGalley and I am also a reviewer with IDW now. Have several of their issues lined up, particularly their various Transformers and G.I.Joe comics. 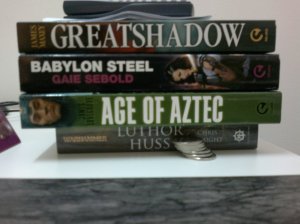 On the novel front, I received my first package of ARCs from Solaris Books last month, thanks to the awesome Michael Molcher who handles their marketing. Some really great titles in the package – Greatshadow by James Maxey, Babylon Steel by Gaie Sebold and Age of Aztec by James Lovegrove. Each of them sounds good and I’ll be starting with Babylon Steel later this month.

The Black Library ARCs for July and August arrived as well and I can’t help grinning like an idiot since all these titles are fantastic. Too much awesomeness for me to handle while remaining sane. This month is going to be an out and out blast! Especially since I’ve already hit the halfway mark on the Reading Challenge, as my counter stands at 100/200. It is slightly misleading of-course, given the standalone short stories on there and a few single comics issues but I’m fairly confident that I should be able to go way past the mark anyways.

← Your Opinion Has Value
Skyrim Parodies →