← NANP: The Significance of Names
NANP: Names Are Fun →

NANP: The Devil’s In The Details

Today on Names: A New Perspective I bring to you friend and author Chris F. Holm, whose urban fantasy/crime-pulp novel Dead Harvest has been one of my favourite reads of the year. The book launched earlier this year and the sequel, The Wrong Goodbye, came out just a couple days ago!! If it is half as awesome as Dead Harvest then it’ll be another top read for me and I look forward to getting around to it. And here’s Chris on what the names of his characters in these novels mean. 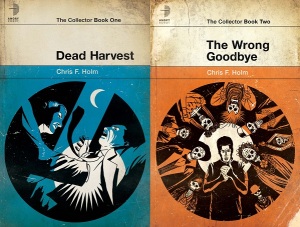 The Devil’s In The Details

I have a confession to make: I’m lousy at coming up with character names.

I think it’s because I’m lousy with names in general. They just never seem to stick. I don’t mean that I’m forgetful: when I meet someone at a party, for example, I’ll remember where they’re from, what they were drinking, and any anecdotes – charming or otherwise – they might tell me along the way. But not their names, which leads to lots of awkward, “Oh, hey… you!” moments should I encounter those people a second time.

So when it comes to naming characters, I try to come up with something that’ll fix that name in my head, and conjure up for me (and, I hope, the reader) the appropriate image – be that a reference or an in-joke or what have you.

Name-wise, my Collector series is easier to tackle than anything else I’ve ever written. I think it’s because I’m playing around with both pulp crime and religion – two wildly disparate influences, perhaps, but each with their own rich traditions to draw upon when it comes to dubbing characters.

My protagonist, Sam Thornton, takes his name from the pulp side of the fence. It’s derived from two of my literary heroes, who’ve both influenced my Collector series immensely: Samuel Dashiell Hammett, and Raymond Thornton Chandler. The handle suits him because although he’s an undead collector of souls, his role in the narrative is essentially that of the hard-bitten detective.

His handler Lilith, on the other hand, is yanked straight from the Apocrypha. These texts, considered by some to be gospel and others heretical, describe her as a voluptuous, redheaded vixen with wicked ways and an insatiable appetite for sex – the first woman in Creation, cast out of the Garden of Eden by God for refusing to be subservient to Adam. Folklore tells us Lilith then engaged her appetites with countless (ahem) members of the demon realm, giving rise to incubi and succubi, who are in turn responsible for our modern (nonsparkly) vampire myth. Though she’s hardly a household name, she’s inspired many a redheaded seductress in fiction, from Brigid O’Shaughnessy to Jessica Rabbit. In short, she’s the archetype on which the modern femme fatale was built – and therefore perfect to play the role of one in my novels.

My first Collector novel, DEAD HARVEST (out now!), features a young girl named Kate MacNeil, whose surname (in a winking minor spoiler) was lifted directly from THE EXORCIST. It also features an angel named So’enel, whose name, if I assembled it correctly (which I may well not have, in which case I hope I get points for trying), is Hebrew for “warrior for God.”

Book two, THE WRONG GOODBYE (which hits September 25 in the US and October 4 worldwide), goes even further down the rabbit-hole of references. It features a character named Charon, after the ferryman of Greek myth who carried the dead to the underworld; Abe Frohman, a nod to Ferris Bueller’s Day Off’s Sausage King of Chicago; and a blind transgender fortune-teller named Theresa who, to my mind, is a twofer in the nerdy reference department, since she’s my riff on T.S. Eliot’s interpretation (in his haunting and magnificent poem “The Waste Land”) of Tiresias, the blind, hermaphroditic prophet of Thebes.

Throughout the Collector series, I try to pepper in as many actual demons, monsters, and minor deities as I can from the world’s religions – as well as from various cultures’ oral history, folklore, and myth. It helps create a more inclusive cosmology, I think – one in which our many and varied beliefs are all attempts to explain and contextualize the same half-glimpsed world that exists in secret all around us. That’s far more interesting to me than simply writing as though any one religion’s got it right. It also makes my job as a writer easier, because I truly couldn’t conceive of anything weirder and more unnerving than the nightmares that lurk in the dark corners of our species’ collective unconscious.

But I’ll admit, not every character gets such highfalutin treatment. Sometimes I just search online to find out what names were popular in the when and where my character is from. Sometimes, I comb through the liner notes of my CDs. And sometimes – when I’m really stuck – I’ll trawl my Facebook feed for names. Like I said, I’m no damn good with them, so the occasional writing prompt is a helpful one.

Come to think of it, “Jain” doesn’t sound half-bad…

To be perfectly honest, I don’t think much of names when I’m reading a novel (or any other printed format, or even audio). It is almost always later, once I’m done, that I wonder if the names had a deeper meaning behind them. Sam Thornton, to me, doesn’t stand out much as it appears to be somewhat of a common name. And I’d say that it fits the character that Chris has created. He really is just an ordinary guy, going out collecting souls of the dead, until he becomes involved in a big conspiracy to destabilize the balance between the angels and the demons. Classic stuff. The fact that Sam’s name doesn’t really stand out lends an air of realism to that aspect of the novel.

Similarly, Kate McNeil is another common name and it also fits the character to a T. Kate is an even more ordinary person in Chris’ world than Sam is. She, like him, is inadvertently drawn into the self-same conspiracy and must suffer through absolutely no fault of her own. She is one of those people who are drawn in from the sidelines (compared to those like Sam who operate in the main arenas).

Whether others such as Lilith and So’enel are concerned, I’m no expert on Christian mythology but at a glance, I get that connection. Probably has to do with the fact that I kind of researched angel/demon names a while back, last year in fact to be more accurate. And also because I’ve seen and read some Christian mythology inspired movies and novels. The connection between that and these names was almost subconscious on my part.

Hindsight is a wonderful thing!

You can find my review of Dead Harvest here. The Wrong Goodbye I’ll be reading early next month, so look out for a review of that around the middle of October!

The next contributor to the series is Young Adult author Kim Curran on the 1st October. You can find a full schedule of here.

← NANP: The Significance of Names
NANP: Names Are Fun →