NANP: The Depths of Names

The final guest for Names: A New Perspective is David Annandale, author of the Jen Blaylock thrillers and the horror novel Gethsemane Hall. I’ve only read some of his tie-in short fiction for Black Library, and what I’ve read has really impressed me. He has a full novel coming out next year, The Death of Antagonis, which I’m really looking forward to. It also helps that David teaches film, video games, literature and creative writing at the university level. How cool is that? Which is why I was so keen to get David on this guest series, even though he isn’t a debut author from 2010-12 as the other writers so far have been, and here’s what he had to say: 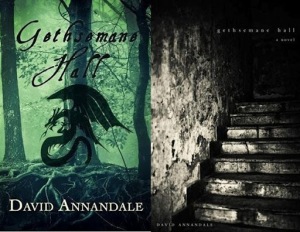 The Depths of Names

All fiction writers are involved in world-building, whether or not their work falls into the realm of the fantastic (by which I mean science fiction, fantasy, horror and all their subcategories and hybrids). As well, one might think of fiction as the truthful telling of lies. I am very fond of Werner Herzog’s term “ecstatic truth” for the truth-beyond-facts that is attainable by art (see http://www.bu.edu/arion/on-the-absolute-the-sublime-and-ecstatic-truth/ for his discussion of this idea). For the lies of fiction to do their work of truth, the reader must able to pretend to be believe in those lies for the length of the work – in other words, Coleridge’s willing suspension of disbelief must be possible. And so the world conjured by the work of fiction, whether it be contemporary New York City, Middle-Earth, or Pern, must be convincing in all its elements, and that includes the names that populate that world. I can believe in a Middle-Earth where someone is named Sauron. But I would have great difficulty in buying into a non-fantastic NYC with a Sauron running around, unless this were a character with some very misguided parents.

But names contribute to the world not just by being a believable part of it. There is also the question of resonance. What are the connotations that a given name brings to the work? Sometimes they can be quite abstract, coming down to the sound of a name. In one of my favourite films, The Omen (1976), the satanic nanny played by Billie Whitelaw is named “Mrs. Baylock.” I’ve always loved that name, finding the vowel-and-consonant play very sinister and formidable. For years, though, I misheard the name as “Blaylock” (which I liked even better). When I came to create my rogue warrior Jen Blaylock in Crown Fire, I named her partly in tribute to the film. I did not expect anyone to catch the (extremely oblique) reference. I did, however, hope the name would ring a little bit ominously for the reader, if only at a subliminal level, as I wanted Blaylock to be the sort of heroine who creates unease. The name was also one of the threads of horror’s darkness that I was trying to weave into the fabric of a thriller series, and thus into the reader’s sense of the world.

Towards the end of the second Blaylock novel, Kornukopia, I introduce a CIA agent named Louise Meacham. She’s a veteran, thoroughly hard-boiled, and I wanted a name that came out in a short, clipped, choppy fashion. So when I made her one of the main characters in Gethsemane Hall, she (and her name) were meant to be part of the cynical, jaded, realpolitik world of the thriller encountering (to its cost) the monstrous chaos of supernatural horror.

But the connotations of a name can be considerably more complex, and here I turn to the world of Warhammer 40,000. These stories play out on an epic scale, of course, but they also have a mythic dimension, and the names are a big part of that. When I write this material, furthermore, I am working not only with names of characters that I create, but more importantly with pre-existing, and the resonance that they entail.

Whatever names I come up with, then, must fit within the specific culture of whatever corner of the 40K universe from which my characters are emerging. But what I’d like to focus on here for a bit is the established characters, as I find their names to be one of the features that makes this universe so rich, and such a delight for a writer to explore.

Take Mephiston, for example. His name is, of course, only one letter away from the literally diabolical. So a hero of the Blood Angels having a name that evokes a fallen angel is already a nice, dark irony, and one that, I think, further underscores the tragedy of these Space Marines, whose nobility is shadowed by a curse that threatens to drag them down to the most savage instincts. And then there is the specificity of the reference: the diabolic name conjured is not “Satan” or “Lucifer” but “Mephistopheles,” and that name is a package deal with Faust and the selling of souls. So factor in Mephiston’s history – a hero who returns from an apparent death, transformed and enormously powerful, but now subject to daemonic attention, and about whom questions linger – and I think the name points the reader toward some very interesting questions indeed. These, at any rate, were the sorts of things I was thinking about while writing about Mephiston in “Eclipse of Hope.”

One of my favourite examples of the enormous resonance of the 40K names occurs in Dan Abnett’s Horus Rising. Now, Horus already holds a place in the 40K mythology that is analogous (but not identical) to that of Lucifer. But his name, of course, comes to us from Egyptian mythology, as does his use of an eye for a symbol. And while there are some parallels between the Egyptian Horus and another religious figure, that figure is not Lucifer, but rather the one whose words are echoed towards the end of the novel, when a despairing Horus cries out to his father, asking why he has been forsaken. I see a very powerful equation here, of name + dialogue + role of character + multiple mythological/religious parallels. These overlapping and contradictory associations, all of which are contained within a coherent characterization, result in an extremely rich figure indeed, one that inspires conflicting emotions in the reader, and thus intensifying the tragic dimensions of the Horus Heresy.

I am reminded here of the theoretical work of another film director, this time Sergei Eisenstein, who sought to embody dialectical principles in his art, bringing Image A and Image B into collision, creating Synthesis C, an emotional response in the audience that could not have been triggered by encountering A or B separately. In their fusion, a new thing is forged, and this is, I think, one of the most powerful effects a name can have. It is one element of an alchemical formulation, bringing a set of associations into a new context. Both the associations and the context are transformed by the encounter, and what emerges is a defining building block of a fictional world.

The next set of contributor guest posts will start going up next week at the earliest. I’m traveling at the moment so the organisation side of things is a little wonky but we’ll be back to a proper schedule very soon!

Hope you’ve enjoyed all the guest posts so far. Do reach out to the authors on social media if you can, they are all wonderful folks.