As I mentioned in latest update from 29th November, I’m doing a review a day for December, as part of an Advent Reviews Calendar for the month to get into the festivities. I’m kicking off the series with this review of Scott Snyder and James Tynion IV’s excellent 2012 Annual for their New 52: Batman run, which is ongoing. 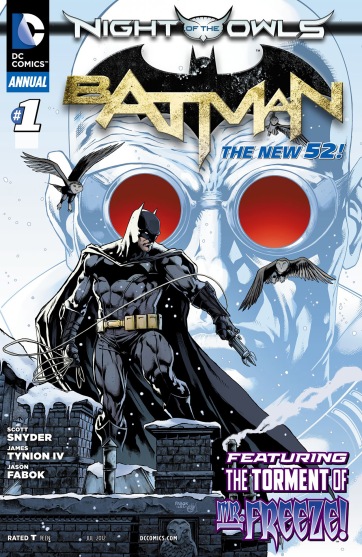 Scott Snyder’s run on Batman for DC’s New 52 line-wide relaunch is the best thing happening right now in comics. Along with artist Greg Capullo who has provided the lion’s share of artwork, internal and cover, for the series, Snyder has delivered on a Batman that is just as iconic as Kevin Conroy’s on Batman: The Animated Series and drawn by the god-amazing Bruce Timm. Snyder has embraced the inherent darkness of the character, paired it up with some truly iconic villains in the form of the Court of Owls, and brought out a character who lives and breathes and is definitely Batman to the core. There’s no two ways about it. When I started reading the series, I was blown away. When I read the 12th issue, I began to consider Snyder as one of the best comics writers out there. I’ve just read issues #13 and #14, and I think Snyder is pure awesomeness, unparalleled. I don’t give out such praise lightly. Fact of the matter is that he does amazing work, and his work bears that out. He’s taken Batman and put his spin on him, something I hope will become a legacy down the years.

The #1 Annual is a departure from the rest of the first year of the series, for the antagonist here isn’t a Talon of the Court of Owls, but one of the most iconic (there’s that word again!) of Batman super-villains from his long history: Mr. Freeze. I’ve seen Arnold Schwarzenegger’s Mr. Freeze, and I’ve seen how Bruce Timm’s animated series portrayed him. I have to say that I really like the character. There are always hints of how he is more than just a man pining for a lost love. There are depths to him that are just waiting to be explored fully.

And that’s what Snyder and Tynion IV do here with this book. They show his depths. They make him compelling in the way that they’ve made Batman and Calvin Rose (a former Talon who has recently gotten his own series) compelling. Victor Fries is now actually more than just someone who wants to bring his cryo-frozen wife back to life. He has a vendetta against Bruce Wayne because it was he who denied Victor that one chance when he could have made everything right again. That’s where this annual issue comes in, because Victor has decided to act on his desires for vengeance, having already sold the secrets of his formulas to the Court of Owls to reanimate their dead Talons.

The two writers use this issue to give Mr. Freeze a truly good outing and make him into a true Batman super-villain, and not one who is comical or boring. We already saw a guest appearance from him in the main-title series and I’m hoping that we see more of him once the crossover event featuring Joker, “Death of the Family”, concludes next year.

The art for this book has been provided by Jason Fabok (pencils and cover), Peter Stiegerwald (colours) and Sal Cipriano (letters). These guys have done a great job. Jason’s Batman is recgonisably Capullo’s Batman, but with slight shifts here and there. He draws all his characters with sharp, clear lines, expressive faces, and strong, confident poses, not to mention detail you can just stare at all day. Stiegerwald’s primary palette for the issue consists of blues and whites, in keeping with Mr. Freeze’s character design and the whole atmosphere that is created is really compelling, a complete experience with the script. These guys have made this issue definitely a Mr. Freeze issue, and I’d like them to guest on the main-title series as well.

If you’ve loved the main-title series, whether you are a long-term fan or not, or whatever else your motivation, you definitely should give this a chance. As a one-shot style annual, this is an amazing book.