This year has seen me become quite the fan of the Judge Dredd franchise, from the movie to the audio dramas. I have a novel omnibus sitting on my desk, and I just recently finished reading the first issue of the new Judge Dredd comics being released by IDW Publishing, who are one of my favourite comics publishers. Judge Dredd himself has turned into one of my favourite characters ever, because of his personality, his attitude, and the entire mythos that’s been built around him over all these years. Duane Swierczynski’s comics are just one more outlet for all that goodness. 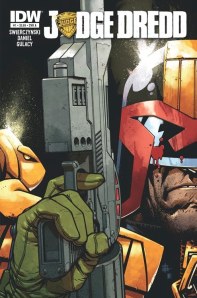 The comic consists of two short stories, both of them about malfunctioning robots/droids, who end up causing severe harm to their owners. Of the two, it is the second story “Protection Racket” that I think encapsulates the Judge Dredd mentality and feel of the setting far more, as I understand it. “Ripe” feels very much by the numbers, and since this is a (comics) short story, the resolution at the end isn’t much of one at all. The pay-off certainly left me wanting more. Both stories are rather straightforward, giving a snippet of life in Mega City One, an average day as it were. Judge Dredd himself is encapsulated better in the first story, rather than the second where he has only a brief appearance, like a cameo.

The art is quite decent. Nelson Daniel did the pencils and colours for “” while Paul Gulacy did it for “”. My main complaint about the art is that the Judges in “Ripe” all look the same, and there isn’t any difference between them at all. Which is somewhat jarring, since it makes me constantly wonder which of them is Dredd. In the second, I think the backgrounds are too… bright. There’s sort of a contrast going between the bright colours and the setting itself, not to mention Dredd’s judgement of the leading character, but it is by no means something that works well.

At this point, I’m just waiting to see what Duane comes up with next. The premise of both stories is certainly quite interesting, and since I’ve enjoyed most of his run on DC’s Birds of Prey I’m confident that he can pull off a better second issue of Judge Dredd. He’s got the writing chops for it.