Joining me today on Names: A New Perspective is the great mercenary of words, Josh Reynolds, who has written everything from Sherlockian pastiches to the dark tales of Dracula, from tie-in fiction to a ton of original work, and lots besides. At the moment, he is one of my favourite authors, as I’ve enjoyed pretty much all the stuff he’s written so far for Black Library such as Knight of the Blazing Sun (review) and Gotrek & Felix: Road of Skulls (review soon!). Given his vast body of work, it was inevitable that he would have some really great insights into the topic of names, and this is what he has to say. 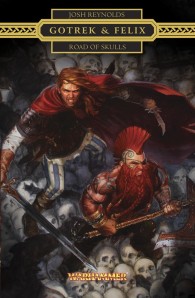 The Little Black Book of Names

‘Saw’, I mean. I saw dead people. And not people, per se, so much as their graves. Sorry, I never could resist an old joke. Is it a joke? Or is it a meme? Did they even have memes back then? I’m getting off topic. So—dead folks…they’re not just for eating!

That was another joke—“Soylent Green” reference up in here, y’all. I’m not a cannibal. I have a certificate. Anyway, dead folks got names, and by and large, those names are more interesting than our modern, conformist names. I mean, who besides the Amish names kids Hezekiah anymore?

True story: my name was almost Shadrach Steel Reynolds. Wouldn’t that have been awesome? I feel certain my life would have been infinitely more interesting if I had answered to ‘Shadrach Steel’. I bet I would have spontaneously exuded theme music with Magnum PI levels of cool. “Where’s that sick guitar riff coming from? Oh, Shadrach Steel is just getting him a sandwich.”

What were we talking about?

Oh, right…names. With names, it’s all about the mojo. It’s all part of the hoodoo that writers do so well. That’s my thinking. You conjure the character with the name. Names define a character and give you an impression of who they are and what they’re about. A couple of syllables can do more to build an image in the reader’s mind than any number of pages of back-story.

Anyway, about five, six years back, before I went full-time writer guy, I went to a certain church yard. Now, this was not a friendly church yard. It was dead and the ground was sour and there was kudzu creeping through the graves and crawling up the clapboard skeleton of the church. There was so much moss on the trees that it made a roof that kept out all but the barest drizzle of light and there snakes in the roots and hogs in the aisles. It was an old place, and forgotten, crouching off a dirt road that you’d miss unless you knew it was there. The congregation had gotten a bad reputation back in the Fifties, what with the snakes and such, and time had sort of…side-stepped the place. They had moved on or died off after that thing that happened and so it just sat and sank into the swamp, year by year.

But the graves were still there.

Not more than a hundred, though there were likely more up under the water or sunk deep into the damp earth. It had been a burying ground for a long time. You could tell, because not all the markers were stone.  I went there originally to—well, that’s not important. What IS important is that I set to copying names into my little black book. Sometime I could only make out part of a name, or just a few letters. But in the end, just as the light died, I had ‘em—every last one that could be had. And I tipped my hat, shouldered my shovel—never mind why I had a shovel, we’re talking about names—and I got gone.

The church yard is gone now. Sunk like Atlantis into the swamp a year or three back, bloop—bloop—bloop, down into the dark, and all them lovely names with it.

But I’ve still got my black book, and I’ve still got those names. I’m probably the only one who does. I use them, when I need them. There’s power in names, and those names especially, and the right name can sell a story or hook a reader. When I require the services of a name—a special name, a name that needs to be just right—I go to my book and I close my eyes and let my fingers do the walking. Some names I use more than others, and they form an inadvertent thread through my stories—fictional family lines, scattered across worlds.

Sometimes I add to the book. When a friend dies or a name pops out at me. Sometimes I see interesting names in interesting places and I just have to have them. In my black book they go, on red pages or white, more characters waiting to be conjured.

They’ve got a life, those names in my book.

The next guest is friend and author (and sometimes, political tutor) Marsheila Rockwell, who will be stopping by on the 14th, Valentine’s Day with an appropriately done post. You can check the full schedule in the link up top.