I love interacting with debut authors. Often, they are much more excited about their books, and they are much more open to talking with bloggers. It’s a bit of a random observation, but it’s what I’ve seen over the past year and 2 months. Names: A New Perspective was created so I could talk with debut authors in a more… professional capacity, and continuing with the trend of having some really great debut authors from the past 2-3 years stop by the blog, today’s guest is Emma Newman, the latest debut from Angry Robot, who are currently my top favourite publisher in the industry. I’ve recently read Emma’s first book, Between Two Thorns (review soon!), and it is one awesome title start to finish. Today is also the launch of the book in the UK (details here), so if you are anywhere near Bristol, UK, be sure to stop by at Forbidden Plant this evening and say hi! In the meantime, here is Emma’s great post on the topic of names. Oh and also, Happy Book Birthday to Emma! 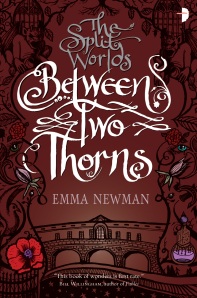 Great Names For The Great Families

Names were one of the most challenging parts of writing the Split Worlds series. I had built a setting in which feuding dynastic families lived in a stagnant society, trapped between the world of their Fae patrons and Mundanus; the ‘normal’ world as we know it. I needed family names to convey being one of the ‘Fae-touched’, status, a connection to the patron and something to express the relationships between different branches of these families living all over the world. The ‘Great Families’ couldn’t have usual surnames, as those are too connected to mundane meaning, but they had to have some basis in something recognisable as the family founders were born in the normal world before it was split.

The solution came to me when I was developing the Fae. I wanted them to be terrifying and beautiful and majestic. I wanted them to have the pettiness of the Greek pantheon but with direct and irrefutable control over the Great Families. No faith required; they are real and they can elevate or destroy a person’s life in moments. Whilst they’re served by tiny faeries, I wanted to keep them closer to the Sidhe of Irish myth than the Disney vision of cute. When I settled upon using flowers – and their associated meanings and physical properties – as the basis of the Fae court, adapting the latin plant classification system for the names of the Great Families seemed more than logical; it fit. Not only could it express an implicit connection to the relevant member of the Fae court, it could also show the links between branches of the same family.

Let’s take the heroine, Cathy. Her name is Catherine Rhoeas-Papaver and her family’s patron is Lord Poppy – hence the Papaver part of her name. Her particular family line is indicated by the Rhoeas part and her family emblem is the red poppy. This is a snippet from the beginning of chapter three to give you a taste:

A black haired faerie was perched on Lord Poppy’s shoulder, wearing a dress of blousy poppy petals, the red striking against the black of his frock coat. It was scowling at Cathy as if she’d personally offended it. Cathy realised a look of abject horror was not an appropriate, nor polite greeting for the patron of her family.

She dropped into a low curtsy, breathless with panic. She’d never seen Lord Poppy in person, but her father had, and he’d drummed a healthy fear of the Fae into her at early age. She struggled to remember the etiquette she’d been taught, but using the correct form of address was hardly going to change the fact that she’d run away from the family, disgraced the Rhoeas-Papaver line and most probably infuriated Lord Poppy to such a degree that he was there to enslave or curse her. Or both.

“Catherine Rhoeas-Papaver,” he said slowly, his voice silken. “What an extraordinary delight to find you at last.”

A branch of the Papaver family split from the Rhoeas-Papavers in the 1800’s after a terrible incident at a ball involving a young man spiking the bowl of punch with a truth Charm. His immediate family headed across the ocean to the new world and established themselves in California. They did so well (thanks to the good fortune of arriving and buying land just before the gold rush) that Lord Poppy recognised them as a new family in their own right and gave them the name Californica-Papaver with the yellow Californian poppy as their family emblem.

One branch of a family can refer to another with only the first part of the name. For example:

She [Cathy] bit her lip. “I’m sorry Tom.” Unable to look into his eyes, her attention drifted down to his hands. She blinked.

He looked down at the wedding ring. “That’s one of the things that happened whilst you were missing.”

“A Californica? I don’t understand.”

“And to bring their money into the family no doubt,” she added, but he remained silent. “An American. Do you like her?”

“We haven’t been married for very long,” he waved the question away.

Status is reinforced by the way people refer to other families. For example, the various branches of the Ranunculus family have had a series of embarrassments over recent years and those with the highest status now refer to them as “the Buttercups” as a way to convey their poor regard. Not only is it rude to use the common variant of the name, it’s also grouping people from all branches of the same family together. As history and politics have shown us, as soon as people with power and privilege refer to others as a group, rather than individuals, nothing good comes of it.

There is a downside to all this, and it’s something I did fret about a lot in the early days of the project. These names are rather long and can be a mouthful. Whilst I love that – after all, those who pay attention to social status love making things hard for people – I was worried it would be something that might get in the way.

Then I thought about all the books I’d read with all kinds of bizarre fictional names. Whilst the names of the Great Families are long, they are latin based and therefore relatively easy to parse. Given the people in the Great Families have familiar first names I decided to stick with the plan.

So there you go; a naming system to convey family connections, patronage and the dubious honour of being favoured by the Fae in a horribly repressive society. Makes me glad to be a simple Newman…

The next guest on the blog is Martha Wells on the 11th, so stay tuned! You can check out the full schedule in the link up top.