Joining me today on Names: A New Perspective is Martha Wells, author of several SFF novels and also a number of tie-in fiction novels, with more on the horizon. I’m particularly excited about her upcoming Princess Leia, which should be really good fun. I’ve just recently finished reading her upcoming YA novel for Strange Chemistry, Emilie and the Hollow World, and it was a damn fine read. In short, Martha is currently a favourite author and one of my next reads will be her Death of the Necromancer, which went out of print a while back and which she has recently self-published. Definitely check out her books! This is what Martha had to say on the subject of names and their importance. 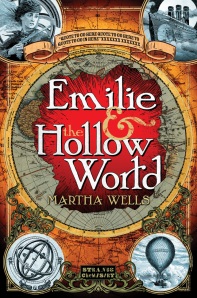 I was on a convention panel once with another writer and two artists.  It was so long ago I don’t remember what the topic was, but I think it was supposed to be a how-to panel on characterization.  But the older artist started to talk about how in his work, getting the eyes exactly the way he wanted them to look was the key to the whole character.  He worked on the eyes first, and once he got them to the point where they just felt right, the rest of the character and the background fell into place.

That started us talking about an equivalent for writers, and we decided that at least for us, it was the name of the character.  Once we got the name right, really right, then the rest of the character was built around that.  That the name could be a tiny capsule of information on your world and the culture you were building for your character.

The discussion was really fascinating and intense.  Then near the end I looked up and I swear the entire audience was asleep, except for one woman in the back.  She came up to talk to us afterward, and it turned out she was a sculptor, so had understood exactly what we were talking about.

Every writer handles names differently, but for me getting the main character’s name right is really important.  It doesn’t help that I can’t really define what “right” means, even to myself.  It’s a completely subjective feeling, that also includes other factors, like how well the name will work with the setting and culture I’m building.

I tend to have the same problem with it that I do with book titles.  Either it comes to me immediately and feels perfect, or I have to struggle and look at lists of names and words until I can find something that fits.  With the book title, if nothing is clicking for me, I can always put it off until after I finish the book.  With the main character’s name, I have to make it work before I write the first sentence.

In the year I started writing The Cloud Roads, I started about five other books that all died on the vine.  (I say “about five” because there were a bunch of starts that didn’t really count because they never got further than a first page.)  But the one thing I was certain about was that the main character’s name was going to be Moon.  I tried to change it a few times in those false starts, and it just didn’t work.  So I started to put together a culture where that name worked, and the next start turned into The Cloud Roads.  I gave the Raksura a naming system based on nouns and adjectives, all names or descriptive words for natural elements.  I didn’t want the system to be too strict, because I wanted to leave room for individual preferences, differences of taste between Arbora and Aeriat, and slightly different traditions among courts.  At some point in writing I realized the names of the courts were actually combined names of a significant queen-consort pair from each court’s history.  That courts could change their names to commemorate some massive change.  So the main character’s name, even though I’m not certain what led me to choose it, sparked important elements of the whole fictional culture.

Depending on the type of setting a writer is building, the names may not be that important.  But they can be a little window onto the larger world.

The next guest author on the blog is James K. Decker, going up on the 14th. You can check out the full schedule in the link up top.