← NANP: The Names Dice
NANP: The Madness of Names →

Today’s guest on Names: A New Perspective is an author I’ve recently discovered and have become a huge fan of, Jean Johnson. A Soldier’s Duty, a military space opera novel featuring a kickass female protagonist, is the first of her books I’ve read, and I can’t wait to get stuck into the sequel, An Officer’s Duty. Jean has also written a number of successful novels in the fantasy and romance genres, and has been featured in a few anthologies as well. In A Soldier’s Duty, the protagonist’s name is central to her identity, and the image that she wants to cultivate within the Marines. Over the course of the novel, it turns into one of the most fascinating elements of the narrative, and here’s what Jean has to say on the subject. 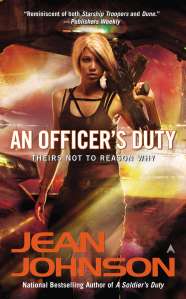 I get asked this question a lot:  “How do you pronounce Ia’s name?”  And of course this question as well:  “Where did you get her name?”  But mostly the first one first, then my questioners will get around to the second query.  Which is a bit of a reversal from the usual order of things, where it’s only the second question that’s ever asked.

This is actually a bit of a taxing question, as in taxing my brain to remember.  Unlike most of my other stories, the books of the series Theirs Not To Reason Why are part of a massive multi-book story I have been working on for well over twenty years.  So to reach waaaaay back to high school and college (the first time around) and try to remember these things isn’t always easy.  Not many people will remember with crystal clarity every decision they made twenty years before as a teenager.

Luckily for you, I actually do remember a bit.  Now, I have always been a gal who plays Dungeons & Dragons and other assorted Role-Playing Games, and as an RPGamer, I had a large selection of multi-faceted dice.  At around the time I first conceived of this series, I remember I was using a random-roll system to select character names out of baby name books.  Yes, baby name books.  I had some really good multi-ethnic ones, too.  I’d roll a d20 (a dice with 20 sides), then a d12, and if the number on the d12 was 1 through 6, I would add it to the d20, and if it was 7-12, I would ignore the result.  This was my method of coming up with 26 possible numbers…of which, 1=A, 2=B, 3-C, and so forth.  (I still use this method sometimes, but not as much anymore.)

For Ia, I rolled a 9, which meant I was looking in the baby name books with the letter I (or i, for those fonts where it doesn’t show up well as a capital letter).  Sometimes I’d count up the pages and roll an appropriate dice to narrow the choice down further, but I do remember seeing at or near the very top of the first page, the Greek name “Iantha,”  which means “Violet.”  And knowing something of how the name is pronounced, I knew it was “ee-YAN-tha,” which just sounded really pretty, neat, and unusual.  Her last name, I decided was going to be hyphenated: Quentin-Jones…and yes, I used the same dice-rolling method to pick a letter of the alphabet and come up with appropriate names.

Oddly enough, however, her middle name didn’t come into existence until just a handful of years ago.  I had met a wonderful woman from Romania who helped encourage me to submit my very first novel, THE SWORD, to an editor at Berkley for their paranormal/fantasy romance line.  Sadly, I lost track of her when she changed jobs, and haven’t heard from her since…but I tucked her name into the story as a middle name, because it’s beautiful and it rolls off the tongue very nicely for my character’s full name:  Iantha Iulia Quentin-Jones.

But getting back to waaaay back when, I realized I needed her to emancipate from her family, to appear to distance herself from them as part of the overall story arc and a handful of important sub-plots.  Lots of people change their name when they divorce themselves from family, so I figured it would be good for my main character to do just that.  Since I loved “Iantha” too much to give it up completely, I decided to try to find a nickname version she could use.

Anthie, Ia, Ianna, Annie…okay, not quite as many options as “Elizabeth” might have for nicknames, but there are a few.  “Ia” as a potential nickname caught my eye right away, too, because it is incredibly short.  More importantly, when I thought of that…I realized it was a way for Ia to “get back at the universe” for forcing her to go into the military.  How so, you may ask?

Well, in the military, they want to know your full name, and to use your full name when you get in trouble—much along the lines of your mother calling you by every last one of your names:  to inject impending terror of the Wrath of Authority about to descend upon your poor hapless head.  By making my main character’s name just “Ia” then she would be able to freely flout that tradition.  No one could really shorten her name any further, and no one could try to use her full name, because that would be the full name.  And since she was born on a colony world that had just gained independence, with only a few hundred thousand colonists so far, then it would be child’s play to officially register her name as “just” Ia.

Short, distinctive, and yet lovely…yet there was one more telling point.  The V’Dan-language phrase “Ia-nn sud-dha,” or  “As the Prophet wills it,”  is an important recurring theme in the series.  So I had to incorporate her name into that phrase…and as luck would have it, “Ia” sounds just alien enough to be part of a foreign language, to be slipped into that language and not noticed until it has snuck up on you, picked your pockets of even the lint tufts, and whispered a terrible joke in your ear.  So even the phrase “Ia’nn sud-dha” technically has her name in it, and was another point I could bind into the overall plot-arc.  It even becomes important in book 3 of the series, HELLFIRE, one more layer in a very rich and heavily detailed story timeline.

After all, I have been working on this universe for over 20 years, now.

The next guest on the blog is my good friend and self-published author John C. Scott, and his post will be live this coming Monday on the 6th. You can check out the full schedule in the link up top.

← NANP: The Names Dice
NANP: The Madness of Names →