← When Choice Is The Problem: On OSC and Ender’s Game
The Cover Art Mega-Post →

Today’s guest on Names: A New Perspective is Andrez Bergen who, going by the back-of-the-book blurbs of his novels, writes some really genre-mixing stuff that is as unconventional as you can get. Andrez got in touch with a while back about participating in a possible blog tour a while back and the great bit in his email was that he’s been a long-time reader of all the bloggery stuff I’ve been doing for almost a year now. Always great to meet a fan! I haven’t been able to read his latest (and upcoming) novel Who Killed The Great Capes of Heropa, but it sounds fantastic so I’ll be sure to check it out at some point. In the meantime, here’s what Andrez thinks of names in fiction. 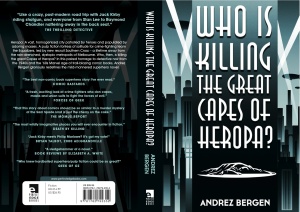 Let it be uttered softly, shouted out loud, or stuck in big letters on an overhead neon billboard: I love names.

They’re the building blocks of endless mirth, derision, homage and abstraction. You can have such fun with names in fiction — as can parents naming children. Remember all three possible inventors of the television? Vladimir Kosma Zworykin, John Logie Baird, and Philo Taylor Farnsworth?

When it comes to characters’ monikers in books, you can’t go past the stoic simplicity of Sam Spade, Rick Deckard, and Philip Marlowe. In Jack Kirby’s baptismal issue of the comic book adaptation of 2001: A Space Odyssey, back in 1976, the principle character was called Woodrow Decker. I’ve never forgotten him.

There are fun names, like Sir Harry Paget Flashman, the fictional reprobate who first appeared in Tom Brown’s School Days (1857) and later in a bunch of novels by George MacDonald Fraser, Major Major Major Major in Catch-22, and still others with a sense of edge like Nina Zero—Mary Alice Baker’s alter ego—in Robert Eversz’s Shooting Elvis.

Comic books and the comic book industry love cavorting with oddball personal and personnel nomenclature: At Marvel in the 1960s Stan Lee was better known as Stan “The Man” Lee, while Marvel’s reigning artist was Jack “King” Kirby. Both these monikers jump off the page, far more so than Lee’s real name Stanley Martin Lieber and Kirby’s Jacob Kurtzberg.

And what was it with three girlfriends of Superman (Lois Lane, Lori Lemaris and Lana Lang), his cousin (Linda Lee) and archenemy (Lex Luthor) all having double-L initials?

In other art, the fictitious (Marcel Duchamp’s “R. Mutt”) jar the senses as much as the real (Hieronymus Bosch), and these things hold sway over everything I see, do, read and watch.

Thus, in my own work, it should come as no surprise that names play an important role in terms of homage, referencing, playfulness and jocularity.

“Wolram E. Deaps”, the antagonist from my first novel Tobacco-Stained Mountain Goat (2011) and the narrator of the second (One Hundred Years of Vicissitude, 2012) is an anagram of Marlowe and Spade, since both novels are heavily influenced by the noir output of Raymond Chandler and Dashiell Hammett. Most of the other characters refer to character and actor names sourced from Hollywood noir and Japanese cinema of the 1940s and ’50s.

I did something similar with novel #3, Who is Killing the Great Capes of Heropa?, to be published in September.

It’s a noir/sci-fi/mystery set in a world of comic book superheroes, but also reflects Chandler and Hammett. It bounces time-wise somewhere between an art deco infused 1930s and the hip Marvel Comics take on New York from the ’60s.

So there are a million and one references to iconic comic book characters and creators from these periods, including the designer of the logo for the Equalizers, the superhero team in Who is Killing the Great Capes of Heropa?. His moniker is “Israel Schnapps”, a silly alcoholic-inclined play on Ira R. Schnapp—who designed the Action Comics symbol (the comic that gave birth to Superman in 1938) and the Comics Code Authority seal you once saw on all comic books from the 1950s.

The hero of the novel is Jacob (Jack) Curtiss. This is a wink at the birth name of artist Jack Kirby (Jacob Kurtzberg) and one of his pen names, Jack Curtiss.

Other bits of Who is Killing the Great Capes of Heropa? directly reference my ulterior career making music since 1996.

I’ve worked under 25 different aliases, creating mostly electronic music that veers from hip hop and techno to experimental, and some of these aliases sounded like perfect names for dim-witted and supercilious superhero types. Hence in the novel Little Nobody, Slam-Dunk Ninja, Funk Gadget, Psyborg-9, Schlock Tactile, Nana Mouskouri’s Spectacles, Dick Drone, Curvaceous Crustacean, Atomic Autocrac — well, they all get a shoo-in here. As does Iffy Bizness and his roll of stickers, based on the record label (IF?) that I ran in Melbourne from 1995. It’s still around, these days helmed by DJ/producer Sebastian Bayne.

In my upcoming collection of stuff, The Condimental Op (to be published via Perfect Edge Books in July), the title riffs off Dashiell Hammett’s iconic detective The Continental Op, while several stories therein revolve around tough Roy Scherer and his younger, bookish-yet-dizzy partner in supermundane investigations, Suzie Miller.

They came out of some recess of my brain that’d lapped up odd-couple interaction from the likes of, well, The Odd Couple, along with the ‘70s Rock Hudson/Susan Saint James TV vehicle McMillan & Wife (I even pinched their real birth-names for the characters—shhh).

The next guest on the blog will be Django Wexler, one of the latest debuts of this year, and his post will go up this coming Monday on the 22nd. You can check out the full schedule in the link up top.

← When Choice Is The Problem: On OSC and Ender’s Game
The Cover Art Mega-Post →