Joining me today on Names: A New Perspective is one of this year’s most promising authors, Django Wexler. The first book in his Shadow Campaigns series, called The Thousand Names interesting enough, was released earlier this month and has generated quite a big buzz both before and after its release. I’m definitely interested in picking it up because I like both editions of its cover and because I like the premise of it. I’m buried under ARCs at the moment and am behind my reading as well so I won’t get around to the book anytime soon, but I’m definitely reading it this year. Till then, there’s Django talking about names in fiction. 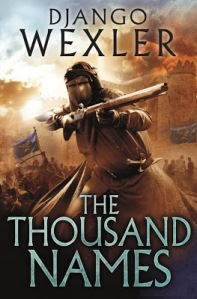 It’s a little bit confusing talking about names in a book called The Thousand Names, so let’s just be clear that we’re on the subject of the actual names of the characters, rather than the mystical archive of Names referred to by the title.  (The latter discussion will probably have to wait until a few more books have come out and I can go into detail without massive spoilers.)

Naming things is an important, and slightly tricky, part of secondary world construction.  In the real-world, the historical factors that affect the mix of names that come out of a particular place or a particular culture are almost unbelievably complex; plenty of U.S. towns, for example, can trace the origins of a set of names to the immigration of a single family early in their history.  The traditional names in a country with a very old culture practically retell its history — England, to take a simple example, is littered with names that are relics of the various invasions of the island that have washed back and forth over the years.

And so on.  It’s actually a little intimidating how much effort could go into creating verisimilitude on this very simple detail — you’d need a complete ethnographic history of your fantasy world, and that’s a lot more work than most authors want (or need) to put in.  So what to do?

My solution (one of many possible solutions) is as usual to crib liberally from the real world.  In particular, I know the people for whom I am writing — that is, present-day English-speakers — have associations that go with names that sound like they belong to particular groups.  I don’t mean cultural stereotypes — please don’t have, say, a nation of hard-drinking potato-obsessives named O’Something, that’s a bad road to go down — but rather that real-life language groups mean that some names sound as though they come from the same culture.  For example: d’Ivoire and Girault seem like they would be more likely to come from the same cultural base than, say, Takanashi and Von Pfaffenhoff.

What you’re doing here is essentially allowing the real world to do the hard work for you — real life has produced these odd mixes of names that readers already are going to categorize together, so you can take advantage of that perception to define the edges and history of your culture.  Let me emphasize that, like any time you draw inspiration from the real world, this technique needs to be used carefully and with sensitivity, and not in a way that plays on real-life stereotypes.  (This is not just a matter of political correctness.  If you invoke a real-life comparison with some group, the readers will drag along a ton of extra baggage that they “know” about that group, which they will apply to your fictional characters and muck up your worldbuilding.)

So, in The Thousand Names, the main characters come from the nation of Vordan, which includes a number of different cultural groups, which I tend to define in general terms with groups of names.  The basin of the River Vor gives us family names like Smith, Cooper, and Weaver.  The family name of one main character, Marcus d’Ivoire, implies that his family originated in the valley of the Pale, to the north, while Winter Ihernglass’ adopted last name hints at an eastern, Hamveltai origin.  Janus bet Vhalnich, the mysterious colonel who takes command, is from mountainous Mieran county, where the last vestiges of an older cultural heritage produce odd-sounding (to lowlander ears) names and nearly indecipherable dialect.

This doesn’t work for everyone.  I know that for some people, the idea of using real-world details interferes with the sense of fantasy, and in strict terms they are correct: it’s unlikely that a completely separate secondary world would have developed naming conventions to match our own, even vaguely.  For me this is related to the fantasy language problem (which I’ve written about: Part One and Part Two) and the trade-offs are similar: familiarity versus suspension of disbelief, depth versus verisimilitude.  Finding the right balance is, as always, the key.

The next guest on the blog is YA author Laura Lam and her post will go up this Thursday on the 25th. You can check out the full schedule in the link up top.