I’ve said before that my initial excitement for Greg Pak’s Batman/Superman was greatly tempered by the actual issues themselves. There’ve been three issues in the main series so far, and then there’s this Villain’s Month tie-in issue, which gives us an origin story for one of Superman’s greatest villains. Across all four issues, I’ve faced one disappointment after another. And its been a case of disappointment in all respects.

Greg Pak has written three Villain’s Month issues: Darkseid, Zod and now Doomsday. The first of these was extremely disappointing, largely because of the story execution. The way it set things up, things looked promising but then it all fell flat. And I haven’t yet read the second issue. Probably for the best if I don’t go ahead and read it now, at this point. 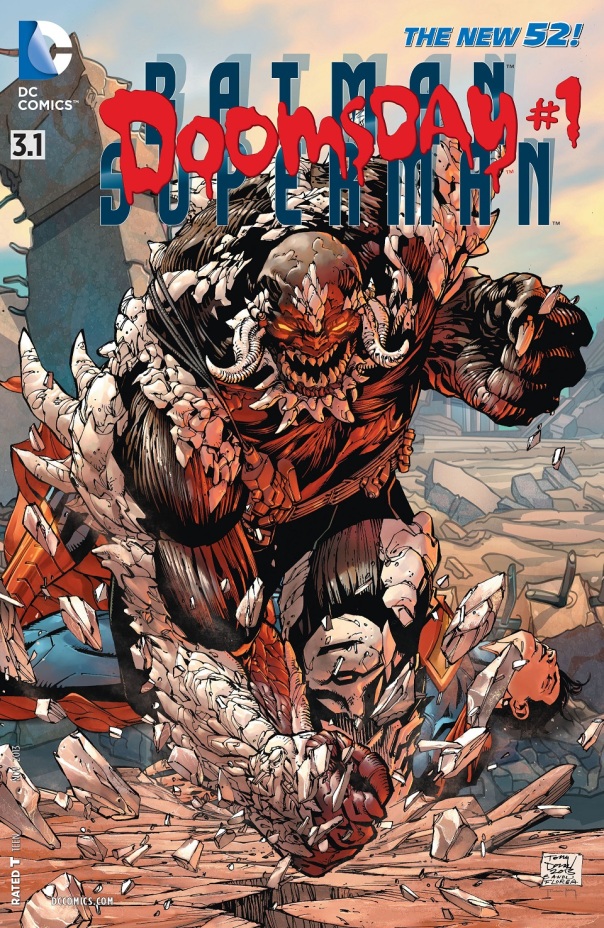 As having recently read the phenomenal The Death of Superman graphic novel, and being somewhat of a fan of the character from his various animated appearances, I was fairly pumped up for this issue, despite the fact that I find Greg Pak’s writing to be mediocre at best, and for me that is a grudging admission. Greg Pak’s primary weakness is that his stories are all over the place and are nothing more than a random meet-up of characters without any kind of driving purpose behind that meet-up.

This has held true through three issues of Batman/Superman, and it has held true for both Darkseid and Doomsday as well. To summarize the events of this Villain’s Month issue, the origin story that Greg Pak tells us is framed through the viewpoint of Kryptonian characters, and not just any Kryptonians but the members of the House of El. Superman’s mother Lara, only a few short years ago, led the fight against Doomsday’s reign of destruction on Krypton. An old ancestor of the House of El has also fought against Doomsday in ages past, in defense of a planet not his own, a people not his own, in an unsubtle reference to Superman on Earth. Zod, once-savior of Krypton and now its greatest criminal has had dealings with Superman’s sister, Kara, from when she was just a child and Doomsday somehow figures in these dealings.

The main problem with this issue was that the three narratives as they are told bear only a passing, brief connection to each other. They inform nothing about how Doomsday was created, why he was created, or why he would even come to Earth. The issue reads as the first half of a larger story. And there is very little point to these narratives in the first place. Each and every Villain’s Month issue has helped to explain the the motivations of the villains featured therein. We’ve seen the issues from the perspectives of those villains. None of those issues devalued their “protagonists” to mere cameos. With Batman/Superman #3.1 Greg Pak had a great opportunity to add in some characterisation to a villain who is a senseless killing machine at best. Who never stops, but keeps going, keeps destroying one thing after another, keeps killing one person after another.

But none of that happens here. The narrative framing of Doomsday’s story is clunky at best because it fails to add any kind of a character to him. He was a bland villain before, and he is a bland villain now. All I wanted was to see some kind of a characterisation, but got nothing. The issue reads as nothing except the launching stage for whatever story that Greg Pak is going to tell in Batman/Superman. He treats this issue as a prologue issue for Doomsday, rather than one that should have showcased him.

And that’s the biggest misstep in this issue. And to top things off, I don’t get at all why Kara has any kind of dealings with Zod and Doomsday. It doesn’t make sense to me. Is she somehow responsible for setting Zod free from the Phantom Zone? Hasn’t she been mistreated enough in the New 52 already? She has been betrayed by her father no less than two times. She has been manipulated by Earthmen and Kryptonians alike for their own gains. Now we have this. Is she going to be the rebellious teenager who falls prey to another manipulation?

I certainly cannot get behind any of that. Whatever Michael Alan Nelson is doing in his current arc on Supergirl is far better than this, because at the very least, his execution is far superior.

If there is any bright spot to this issue, it is the art. Brett Booth and Norm Rapmund, the stars of Kyle Higgins’ Nightwing run until they moved on, handle all the art duties here, with colourist Andrew Dalhouse and letterer Carlos M. Mangual. No matter which character or panel they draw and colour and ink, they are all on top-form. The artwork is clean and crisp with a wonderful coloured lighting effect that really makes the panels pop out and make this one of the best drawn comics of Villain’s Month. Brett, Norm, and Andrew, they are all superb artists and this issue is another feather in their caps.

But good, or even great, art cannot make a terrible story palatable or acceptable. And that is the case here. After the enormous disappointment of all of Greg Pak’s work for DC that I’ve read so far, I’m not inclined to support the writer in any way. I just can’t stomach such terrible stories.