Another Wednesday, another New Comic Book Day. As DC’s regular line-up of comics resumes after the month-long interruption of Villain’s Month, one of my most anticipated issues of October is finally here. The next chapter in Scott Snyder and Greg Capullo’s awesome current arc on Batman, Zero Year. Till now, we’ve seen the early beginnings of how Bruce Wayne becomes Batman and have seen two major villains, in disguise of course. And its been great.

An oversized-issue with a not-quite-backup story, Batman #24 continues this ongoing saga, said to go on for another six issues and one that ties into various other Bat-family titles and even a few others, such as The Flash. All of which just means that this not-quite-event is becoming a really fun event really. But enough waxing lyrical. Let’s get to the review. 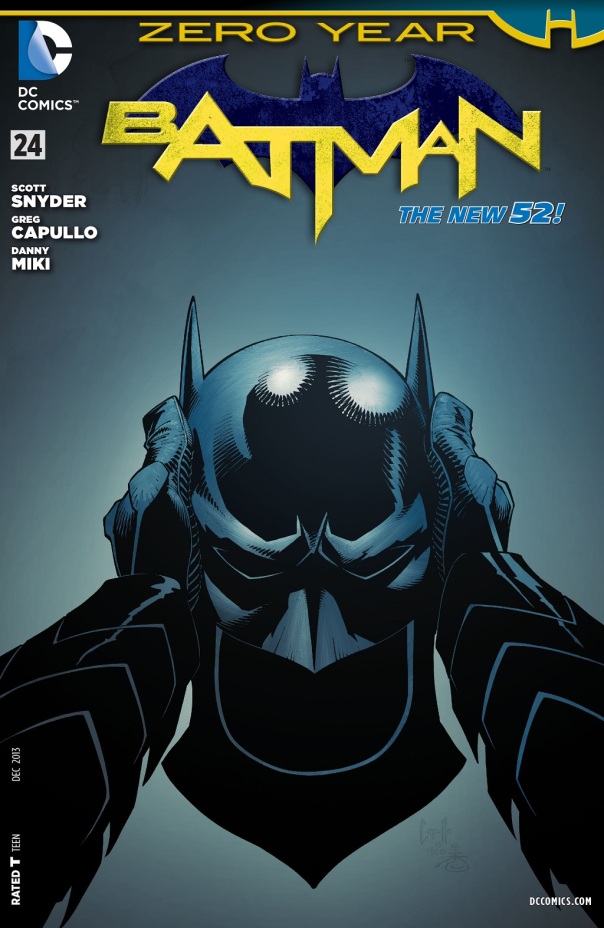 Considering where we left things off last time, this issue begins with a suitably soft tone, what you could call an “intro phase”. We see that Bruce and Alfred have finally made themselves a nest in the caves beneath the manor and that the leader of the Red Hood gang has decided to up the stakes since the Batman has changed the playing field considerably with his presence. The way that these pages read, I get the same vibe as I did in Batman Begins when Batman saves Rachel the first time from Scarecrow. The dialogue here is key in that regard.

From there-on out, the issue moves into full overdrive mode as we got from one set-piece sequence to another. We see how the Batman begins to dismantle the Red Hood gang, how the Gotham Police Department, especially Jim Gordon, becomes involved, and just what exactly the gang has in store for Gotham. With all the talk that has been seen in the previous 3 issues with respect to the Red Hood gang and its leader, things come to fruition here as we finally get to learn just who this guy is. Or at least, who this guy used to be, and we already know who he becomes. The fun part is in seeing the execution come about.

And this is where Scott Snyder rolls double sixes. After the excellent intro of the opening pages, everything else is just icing on the cake really, and still a damn fine read. The entire action sequence set in the second half involves a big showdown between Batman and the Red Hood gang, including its leader. It all makes for some really stirring reading, no matter how many times I read the issue, and I’ve already gone through it 3 times as it is.

The latter pages of the issue are taken up with an epilogue-ish ending where we move slightly forward in time, to when the Batman is making his mark across Gotham, bringing the criminals to justice and establishing his identity. And this is the part which finally involves the Riddler, who has been built up in the previous issues quite nicely. However, this particular story isn’t as good as the main event, sadly. It is a bit too preachy of sorts since it is pretty much Alfred telling Bruce how to be Batman and why the city is going to care more about Batman as an icon, as a performance rather than whoever is underneath the cowl and the armour.

If there is one thing that I did not like about this issue, it is that we don’t really get to see the conclusion of Phil Kane and the Riddler’s confrontation from the previous issue. It is never addressed, even though we see plenty of the former and he is involved in a rather moving scene towards the end of Scott’s particular story.

Other than all that however, Greg Capullo, inker Danny Miki and colourist Flo Plascencia are absolute aces when it comes to the artwork. I don’t know how these three do it but they continue to put out one hell of a comic. In keeping with the previous issues of Zero Year, this one too is absolutely rich with colours and variety in the artwork. Specifically, Greg has an amazing eye for when to draw (or reflect) the Bat-logo throughout the comic. Each instance is different than the last and just as amazing. There’s one scene, when Batman attacks a group of Red Hood gangers, where Batman strings up a bunch of them to a billboard, arranging them in the shape of a bat. That was really, really cool. With all the explosions and otherwise action scenes in the comic, both Danny and Flo get plenty of opportunities to show off their mad-awesome skills.

However, just as with James Tynion’s script in the not-quite-backup story, the art by Rafael Albuquerque is a bit of a letdown as well. His Bruce/Batman just looks really weird and there is, sadly, often an inconsistency in how he is drawn. His Alfred too looks both younger and older than Greg’s version, which was just odd.

Aside from a few niggles, this really was a great issue and it has definitely established the origin of one of Batman’s greatest villains, and also moved the entire story forward very significantly. And the art continues to rock.