I seem to be on some sort of a high of late, reading kids-friendly comics. It opens up a whole new world really. Batman ’66, Lil’ Gotham, Samurai Jack, and a bunch of others. Lil’ Gotham especially looks very interesting and I’ve certainly been hearing great things about it, which is why I bought the first few issues this weekend. Can’t wait to get into them. It appears that what Lil’ Gotham does with Gotham and the Bat-family characters, Itty Bitty Hellboy does with Mike Mignola’s signature creation.

Itty Bitty Hellboy reimagines Hellboy and his gallery of allies and villains for a very young audience, which is a really interesting concept since the Hellboy comics are very adult-oriented and have a very grim and gritty feel to them, from what little I’ve seen while browsing through. Even the two movies that have been made are a great example of that vibe. Itty Bitty Hellboy goes off int he completely opposite direction however. 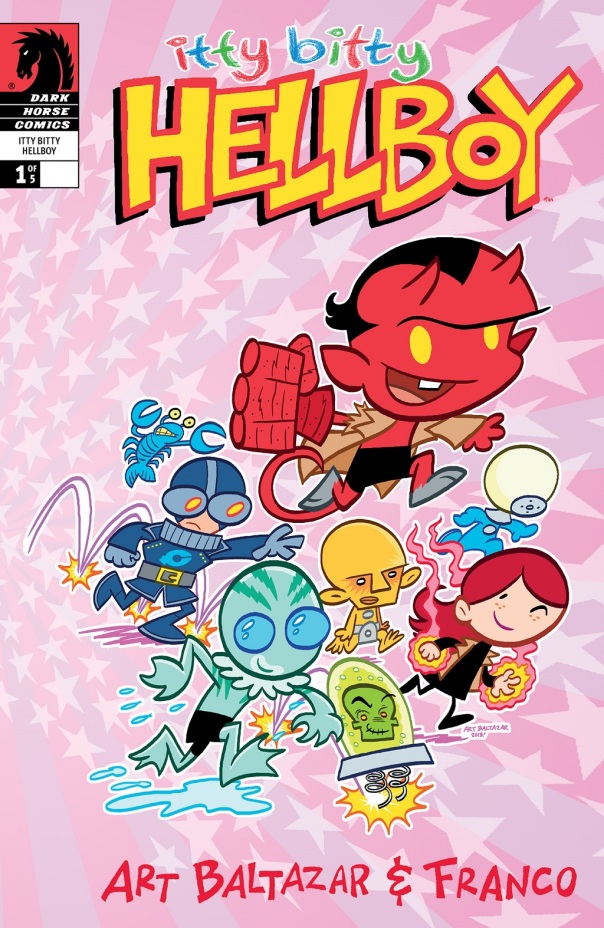 The cover, by Art Baltazar, makes it quite clear what kind of a comic this is going to be. This is an extremely kids-friendly reimagining of Hellboy and I have to say that Art and Franco have done an excellent job here, managing that tricky balance. If you’ve ever wanted to share Hellboy with your kid(s), then this is where you can get started on that.

This issue is made up of 3-4 page short stories that explore a world where the Nazis, led by Karl, live out of a cardboard box marked as Dishwasher and are on an espionage mission against Hellboy and the good guys, who live out of a cardboard box marked as Refrigerator. Rasputin is a ghost. Roger hides naked in the bushes and leaves his underwear all over the place. This and more can be found in this comic, and by god, its hilarious in the extreme.

I’m not very current on the Hellboy lore, beyond what I’ve seen in the comics and what I barely remember from a couple of other Hellboy comics that I read ages ago. But, as I discovered, you really don’t need to be immersed into the lore at all, beyond the basics: Hellboy and Co. good, Nazis bad. That’s it. And it makes for a great experience since you can come in and pick up the comic without having to worry about continuity or anything. Extremely approachable is what this comic is, as it should be, to be honest.

The stories are brief and entertaining, definitely laugh out loud material. You could read these comics to your kids, or you could let them read for themselves, and it’d be equally great.

Art Baltazar is the artist here and he brings a really nice, clean feel to the characters. All the action takes place in normal suburban lawns, which makes for a great background. And the characters are nicely realized, such as Abe and Johann and HB himself, which was additional awesome on top of that.

I don’t know. I had a hell of a lot of fun with the comic. Its cheesy, its simplistic, but it does exactly what it says on the tin and it entertains.