Following the recent news that Aquaman scribe Geoff Johns is stepping off the title, starting with issue #25 next month, I suppose it shouldn’t be a surprise that this issue has been wr itten by (thus far) guest writer John Ostrander, who previously penned issue #20. Much as with that issue, this too is a story about The Others, the team of heroes that Aquaman used to be a part of before he stuck in with the Justice League. And once again, this issue is one that lacks excitement and a certain finality, unlike all the issues penned by Johns himself.

This issue introduces a new foe for Aquaman and The Others, someone who has been a part of the DC universe for a long time, and its great to see her make her New 52 debut. Least, I’m assuming its her debut since I’m haven’t seen her in any of the books I’ve read or seen her name come up anywhere, not even in Paul Cornell’s Demon Knights Volume 1. But the issue isn’t just about her of course, its about The Others themselves, the team that Aquaman brought together years ago, and the one that he still nominally leads. 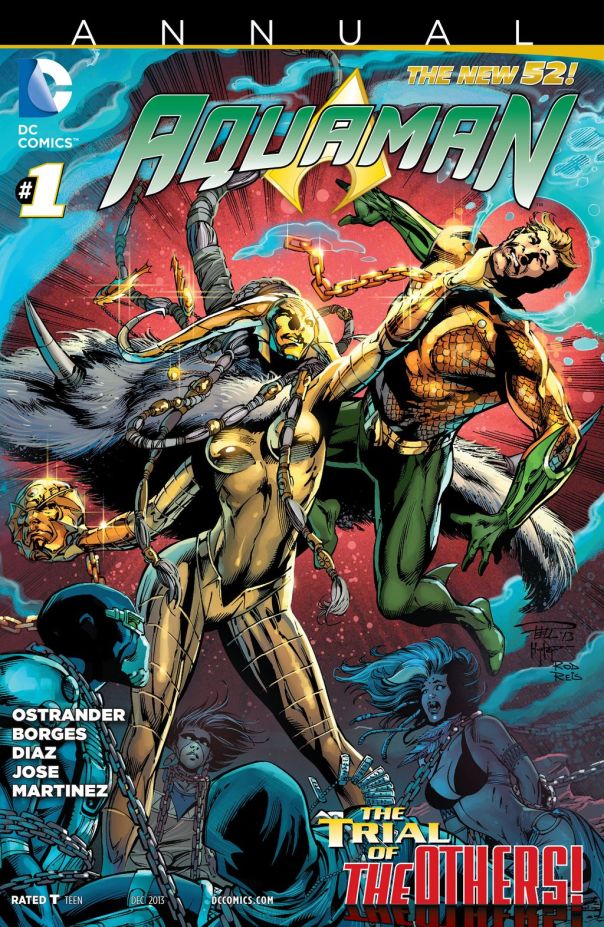 The issue starts off with reintroducing us to Sky, who we last saw in issue #20 and Vostok, also known as the Operative. Living on an abandoned island out in the middle of nowhere, Vostok is having a bit of a breather with his grandson and Sky, when the three of them come under attack by maddened and mutated sea-life. Aquaman is on hand to save them all but curiously enough, it proves to be a diversion intended to steal away Vostok’s special helmet, an Atlantean relic given to his safekeeping by Aquaman. From there on out, we see the remaining members of The Others come together to combat this new threat, a sorceress of extreme power who wishes to destroy the world.

Some of the things that really stuck out for me were: the lack of any proper motives or characterisation for the antagonist, little to no of the heart-felt interactions between The Others of the kind that we saw from Johns’ pen, and a complete non-ending that was extremely abrupt, as if the story was cut off or a page is missing. Its an odd decision to make, considering that the series is getting a new writer next month and that Aquaman has been one of New 52’s few true successes. Ostrander has a great opportunity here but he unfortunately squanders it for a story that lacks excitement and reads purely by the numbers. I liked his Villain’s Month one-shot, Wonder Woman #23.1: Cheetah, loved it in fact, but this issue pales in comparison. Its not even as good as Aquaman #20, which was fairly interesting and really helped to build up The Others and introduced a new team member as well, in Sky.

But, there were a couple things that I liked as well, mostly Sky. Being a new member, she is still trying to fit, although Vostok’s innate distrust of her makes things complicated. But, we really get to see a lot of her in this issue, and what we see is great. The same goes for Ya’wara, one of the original members of the team, and this time we get to learn more of her role in the world and what makes her tick. There were some cheesy scenes involving her, which were just too simplistic in their effect and execution, but I suppose its the thought that counts.

The art is split a lot of ways. There are two pencillers, seven inkers, two colourists and a letterer. There’s absolutely nothing in this issue that warrants such a big split in the artwork. All it does is create inconsistencies, one of the most stand outs of which is how Ya’wara is drawn. Her look varies from page to page and it just kept confusing me. In one panel she’d be as she’s been drawn previously in various issues, in one she’d be really old, and in another she’d be like a teenager. I have no idea why there was such a big inconsistency with her. And this applies to many of the pages. Geraldo Borges and Netho Diaz have similar styles, but they draw very differently all the same. And the army of inkers confuses things even more.

This could have been a great issue. In fact, John Ostrander would have done well to tie-in this issue with the ongoing Forever Evil and tell what The Others are doing while Aquaman is missing, presumed dead. That would have been a far better approach since the story could have been left genuinely open-ended. The way things end here, its just disappointing.