One of the many animated franchises that I grew up with is Teenage Mutant Ninja Turtles. The original gang of four and Splinter and April are some of my favourite characters and I remember enjoying their animated adventures a lot, whether on the television or the VHS tapes that my parents would get for me every now and then. I think at one point I even wanted to be a Turtle, Michaelangelo to be specific since we share a love of pizza and a carefree attitude.

Recently IDW announced that in addition to all the TMNT comics it was putting out it was also going to publish a series of one-shots that would focus on all the different villains of the franchise. I’ve only read three so far, Baxter, Alopex and this one, so I’m a bit behind on my reading, but I’ve certainly had a lot of fun. These are characters that I barely remember, if at all, so its fun to get stuck in once again and see them all in a very… modern context. 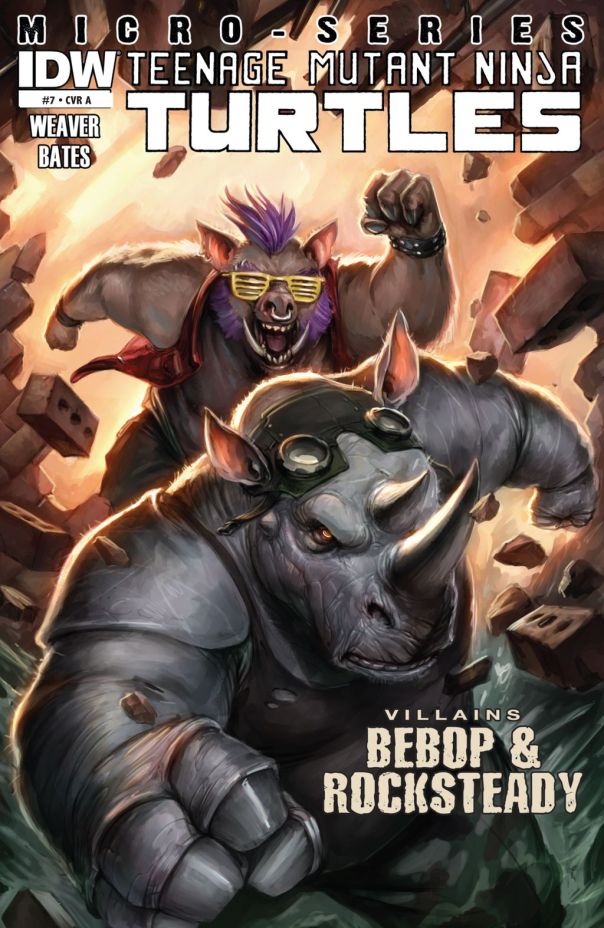 First and foremost, I remember that Bebop and Rocksteady were oddball goof-ups. They are the kinds of villains that you just love because they are incompetent and hilarious but always… well-meaning. Its kind of an odd-way to characterise antagonists, but it worked really well for these two in the animated series and this something that Bates and Weaver focus on in this comic. Wannabe gangers Bebop and Rocksteady have been kicked out of every gang in New York City and they are down in the doldrums. And then they end up joining the Foot Clan after proving their insatiable raw capacity of violence and are given the chance to become mutants, like Alopex.

This comic is very much an origin point for these two characters and this is what I loved most. It refreshed the characters and got me to care about them once again. Their goofy nature is always front and center, even when there is something violent going. Neither Bates nor Weaver shy away from the kind of violence that these two are capable of, and there are plenty of bloodbath scenes in this issue, so its nice to see a book that is honest and open about that kind of thing. Its the marriage of their clownish nature and their utter badassery that sold me on the characters.

I’d gone in with no expectations since I genuinely didn’t remember them all that much and I was quite surprised with how good this coming appeared to be. I had to re-read it a couple times to make sure that I didn’t miss out on anything since I was quite sleepy when I read it last night, and it holds up rather well in that respect.

I’m not reading any of the TMNT comics right now, but after reading this issue I definitely want to. I read Mateus Santolouco’s excellent 4-issue The Secret History of The Foot Clan earlier this year, but that’s really been it, aside from some random stuff I read last year. This issue appears to lead in to the City Fall arc that is happening in the TMNT books right now, and if any of those are as good as this one-shot, then they’ll be entertaining for sure. That’s my expectation at least.

Bates handles all the artwork in this issue and I have to say that he goes full-out with how he draws the two characters and everyone else. This is a rough-and-tough book, even though it is based on something that was originally conceived as an all-ages concept. The goofball nature of Bebop and Rocksteady made sense for the animated series, and it makes sense here too since a lot of that comes through in the dialogue. Where Bates goes the extra mile is in staying true to their look, for the most part, while also emphasizing their monstrous nature. You look at Bates’ Bebop and Rocksteady, and you get the idea that these two are absolute powerhouses in a fight. And like I said earlier, Bates doesn’t shy away from that. Each of the three bloodbath scenes are exactly that, lots of dismemberment and blood and swords sticking out of people and so on.

Bates additionally alternates well between the darker and lighter scenes alike. There’s no one tone to the issue, and it can certainly be quite grim and gritty in places where Bates is bringing their monstrosity front and center, so the two-tone approach is welcome. It adds to the issue rather than take away from it.

There are a few places where the art doesn’t feel as clean and polished as it does in the rest of the comic, specifically the scenes involving one of Shredder’s lieutenants in the Foot Clan, Karai. Slight bit of an inconsistency in how she is drawn. And some of the scenes are just indistinct, where the pencils are just not clear.

But, I enjoyed the issue all the same and its given me a reason to come back to this franchise after a long, long hiatus.