Vertigo took some (further?) forays into the horror genre last month, the month of horror, by bringing out a new series called Coffin Hill, written by Caitlin Kittredge and drawn by Inaki Miranda. With a story revolving around your heiress Eve Coffin, Kittredge created a dramatic world with all the typical horror elements, but none of the cheesiness and very little of the cliches. Her world was full of interesting characters, and interesting events, which made the first issue a great experience, not to mention Miranda’s spectacular artwork.

With the second issue, we see the world developing, and so do the characters, as more mysteries are introduced while some are answered. Where the first issue could be called a bold but hesitant step forward into the genre, the second issue is the opposite. It feels as if an experienced writer is at the helm of the series. Sure, there are a few flaws, but the second issue proves to be a much more satisfying read, which is what I wanted and what I got. 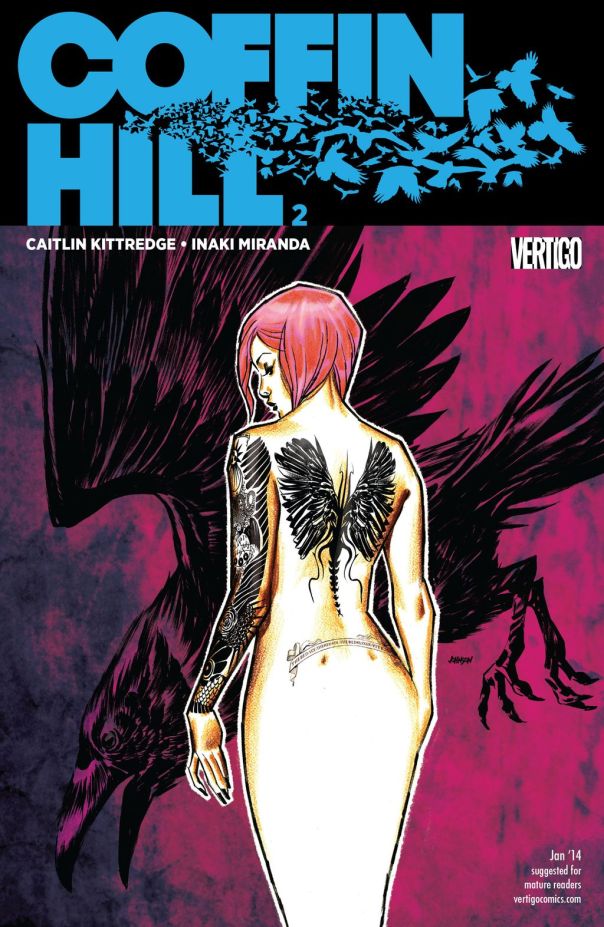 There were a lot of things that happened in the (extra-sized) first issue and we got front-loaded a lot of different things, such as the split narrative between Eve’s present as a beat cop and her past as a rebellious teenager who dabbled in black magic. There were lots of mysteries attached to both eras of her life and it created a really interesting narrative that proved to be a bit fractured and uneven in pace. With the new issue though, it seems that Kittredge has gotten over those flaws and to me it seems like she’s written a much tighter comic.

The pacing more of all is no longer uneven because now we are already familiar with the world and a little bit with the characters, so the story flows much better, and the split narrative works much better this time. It gives a “ticking clock” feeling to the entire narrative, which I’d say is one of the core essentials of any good horror story. If there’s nothing big to look forward to at the end of the story, then the entire journey getting there is pretty much meaningless. Not so with Kittredge and Miranda’s Coffin Hill #2.

One of the things I really loved this time around was that we got to see more of who and what Eve is. We get a hint that she maybe, maybe, does have some black magic powers after all, and that she is conflicted about using them to, essentially, get ahead. Being a black magic user gives her a certain perspective on things, especially when one of those things happens to involve some missing teenagers in the very woods where almost a decade ago she and her friends underwent a really traumatic near-death experience.

Gets the blood pumping that’s for sure, since this time we actually get to find out how things went wrong in that ritual she attempted with two of her closest girlfriends. Those are the scenes where Inaki Miranda and colourist Eva de la Cruz are on their top form, since they manage to capture the whole horror and creepy vibe of those scenes with full effect.

With Eve, the story is never predictable, since there are always some twists involved, and it keeps you in the comic, engaged and interested. This is a good thing, especially for a horror comic, since its easy to lose interest and just get bored with the whole thing. This is where Kittredge’s writing proves to have improved since the first issue.

Once again, the artists all do a wonderful job with the internal artwork. This book distinctly stands out as a horror comic. There are lots of details once again in the artwork that help to accentuate the whole horror effect, such as when Eve jumps on the hood of a state police car and there is a shower of crow feathers around her, or her black eye, or all the uncounted creatures of the night in one of the central pages. There is a distinct visual feel to this comic and the artists are doing their absolute best to draw the reader in to this world and give them an experience worth talking about. That’s how it seemed to me.

So, in closing, quite a good second issue. If it continues like this next month, then Coffin Hill #3 is sure to be another great issue.