Well, they’ve gone and done it. First the Rogues decided to see what the Crime Syndicate was all about. They went to the big meeting at the location of the crashed Justice League Watchtower, they heard the spiel, they were mildly interested. They came back to Central City, only to find it pretty much wrecked and the heads of humans and apes mounted on sticks. Then the Deathstorm and Power Ring showed up and told them to destroy the city. Captain Cold said no. And that, as they say, was that.

Brian Buccellato’s take on the Rogues has been one of the best things about his work. Whether it is in the recent issues of The Flash or in the recent one-shots and the new mini-series Rogues Rebellion, he’s made the characters into a really interesting team, characters that you can get along with and be invested in. He continues that in the second issue of this Forever Evil tie-in mini-series, and he does it with style. The one big kicker though is that the first half of the issue was already done in Geoff Johns’ Forever Evil #3, and so half this issue is just recap material unfortunately. Entertaining though! 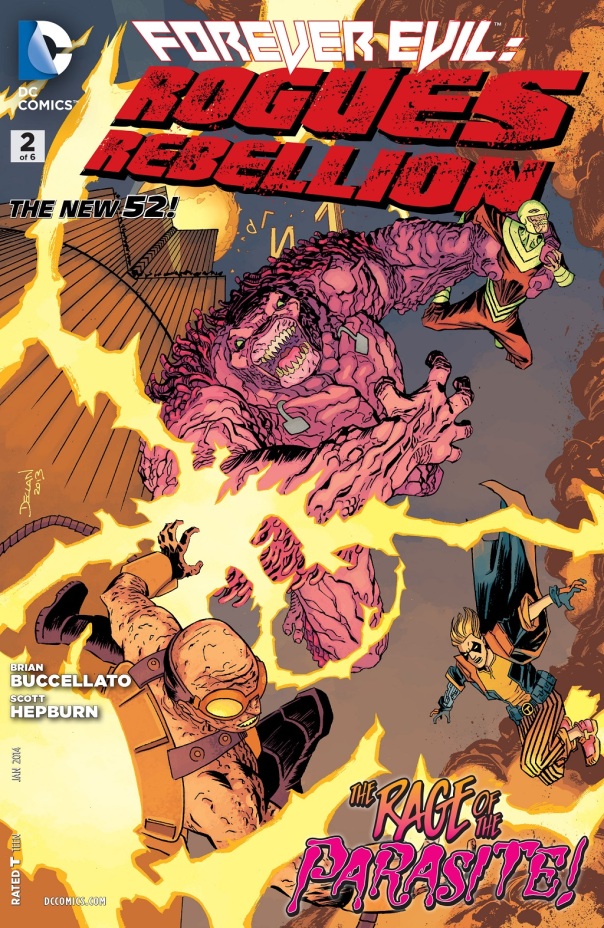 Like I said, half the issue is a recap. When I read Forever Evil #3 a couple weeks ago, I remarked on the fact that Geoff’s script for that issue seemed to be encroaching on Brian’s territory with the rogues (review). It made sense why Geoff did what he did, considering how that issue turned out, but it still came across as weird since that part of his script was an extremely Rogues-focused story that is redone here, albeit with a different artist (the unremarkable David Finch vs the excellent Scott Hepburn here). I had some fears that this would end up happening for this issue, and it did, so I’m a little disappointed.

If they really did want to go this way, then they should have just released this issue before releasing Forever Evil #3, so that people aren’t cheated out. But then the thing is, you are only “cheated out” if you are reading the entire event, like me. For those who are reading only Rogues Rebellion, they have nothing to worry about. But it rankles.

So anyway, despite that fact, Brian tells a really good story. With Scott doing the pencils along with Nick Filardi on the colours, that entire sequence, with the Rogues taking on Power Ring and Deathstorm comes across much better. Its a matter of style really. The script is essentially the same, but the artwork gives it a whole another feel. Scott’s characters aren’t as… realistically proportioned as David Finch’s, but that’s fine. Again, it comes back to the style, and considering that we are talking about the Rogues here, the Scott’s style feels much more natural to them than David’s did.

But that’s not all. Once we are over that overlapping territory, we move into some new material, as advertised on that cover. The Rogues, minus Captain Cold, end up somewhere in Metropolis and with the Crime Syndicate now having put a price on their heads, other supervillains of the DCU are after them now, starting with Parasite. The character got a really disappointing one-shot during Villain’s Month, but he’s back here, and he’s much better. Not the Parasite that I know from Superman: The Animated Series, but that didn’t bother me over-much. Brian gives him a distinct voice and he sets up the action scenes really well. With the Rogues’ powers on the fritz, things look pretty damn serious for them, for once.

I can’t say enough good things about the art. The art is fantastic. No matter which character or situation he is drawing, Scott is always on top of his work, and he knows the characters inside out. I didn’t spot any inconsistencies of any kind in the artwork, and that’s for the best since overall, his work is really top-notch. Giving him assists are Nick on the colours, and Taylor Esposito on the letters. As much as Scott does a great job with the pencils, Nick does the same too. I found Power Ring to be coloured a little weird, in very muted, drab greens, and that kind of threw me off a little, as did Weather Wizard’s control stick which was a touch too bright for my tastes. But overall, fantastic job. The scenes where Deathstorm depowers Captain Cold was just hauntingly amazing, to watch as he literally pulls his powers out of him… just great.

So, another strong issue from Brian and team, and I’m still fully onboard with this mini-series. Just slightly concerned where Brian is going with all of this though, considering where the team ends up on that final page, and what happens to them. That had me scratching my head a little since it appears to conflict with what’s going on in Peter J. Tomasi’s Forever Evil: Arkham War right now. We’ll see next month I suppose!