Last month J. M. DeMatteis kicked off the Forever Evil: Blight arc, the fourth tie-in story to DC’s current mega-event, Forever Evil. Blight is an 18-part arc that will run through most of DC’s supernatural books all through March. Forever Evil was already DC’s biggest crossover in the New 52 relaunch, but with the addition of Blight, it has grown significantly, and for me, it definitely conveys a sense of scale that the event requires with all its involved internal complications.

Justice League Dark #24 was an excellent issue, the best in the entire series so far I have to say. Topping it would have been a tough job but I trusted DeMatteis to prove equal to the task. And he almost does. While Justice League Dark #25 isn’t as excellent as its predecessor, it is still a damn fine comic. J. M. DeMatteis continues to impress with each issue and this one is no exception at all. I enjoyed his Phantom Stranger #13 earlier this month as well and DeMatteis is definitely on a good streak right now (as long as the new Larfleeze holds up, which I’m sure it will!). 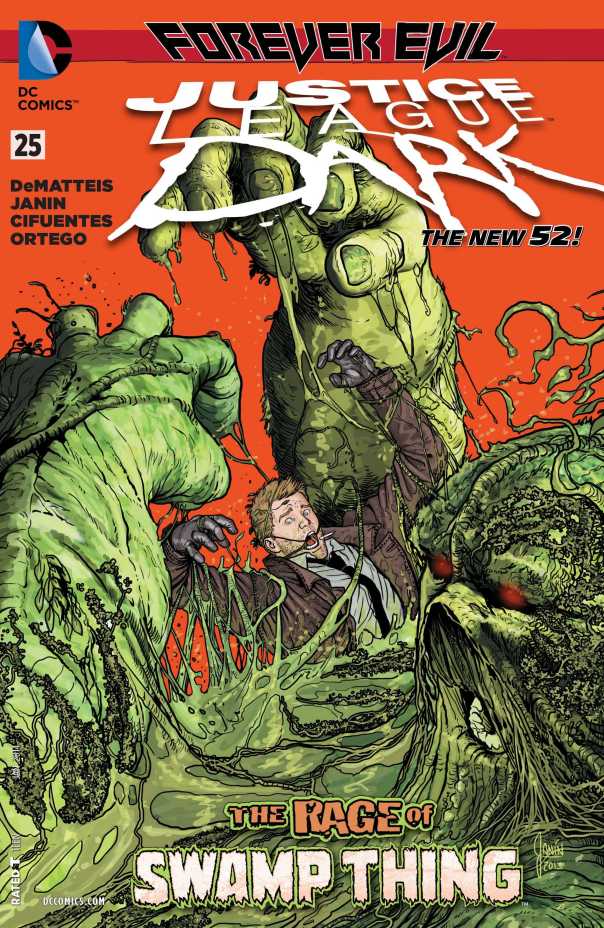 In the previous issue, we saw that John Constantine was the only member of the Justice League Dark to have survived the Crime Syndicate’s attack on the Leagues back in Justice League #23. Finding himself all alone and back in the House of Mystery, he refuses to acknowledge or accept that they are all gone and he decides to do all he can to bring them all back. But, certain things intervene and he ends up getting involved with an incarnation of the Evil that the Syndicate brought with itself from Earth 3, the birthplace of Evil, and with Nightmare Nurse, an on-and-off ally of the Justice League Dark. She has some rather spectacular plans to bring back Constantine’s friends and in this issue we see how they are meant to play out.

Big team books often involve character cameos and Justice League Dark #25 is no exception to that. Swamp Thing once again takes to the shared stage, in opposition to Constantine and Nightmare Nurse. The latter did something quite horrific to him, and he wants revenge. But as we know from both the previous issue and the end of Phantom Stranger #13, he does end up allying with them, thought he does give them a great run-around all the same, to make a specific point that was certainly not lost on me. The way that DeMatteis writes the character really makes me want to pick up the character’s solo series and start reading it. If I can manage it, I certainly will in December!

Since its early days yet for Forever Evil: Blight, this being only the second issue in the arc, groundwork is still being laid. DeMatteis handles it all with panache and he tells quite a riveting story here. The interactions between Constantine, Nightmare Nurse and Swamp Thing define this issue and in each, there is a distinct voice and personality to them that makes the entire issue a really fun experience. I had a slight issue with how DeMatteis handles Evil (or Blight rather). It didn’t jive so well with how he portrayed it in the previous issue and that was a major negative for me, although it didn’t impact my reading experience all that much since the entire context of those scenes was much more than the sum of its parts.

The art team of Mikel Janin, Vicente Cifuentes, Guillermo Ortego, Jeromy Cox and Rob Leigh once again did a superb job with everything. Except for Blight itself, they all outdid themselves once again. Lots of details in every panel, which is something that Janin has excelled at since his start on the series and the addition of Cifuentes and Ortego as inks helps the art in giving it a strong definition that really brings all the details out. Together, they are all a really strong team, definitely one of the best in all of New 52. Their work jives extremely well with DeMatteis’ scripts and its fun to see all of it come together so well.

With this issue, we continue see the events of Forever Evil: Blight unfold. DeMatteis is building up a really interesting mystery here and I can’t wait to see how that works out well with Ray Fawkes’ Constantine in a few short weeks. Should be extremely fun!