Coming right on the heels of Marvel’s biggest and grandest event of the year, Infinity, is a tie-in issue for one of its longest-running series at present, Wolverine and the X-Men, which I started reading thanks to another event and am kind of liking thus far. I haven’t read Infinity till now, aside from the first couple issues which I found really confusing and laborious reading, but I do plan to go through it soon since all the issues are now out and I can read them back-to-back without any gaps. Seeing the Infinity logo on this issue made me think that this would be a direct tie-in, but its a side-story at best and focused on a single character.

With Battle of the Atom over now, I’m seeing that Wolverine and the X-Men is quite an ensemble book of various X-Men characters, young and old, inexperienced and experienced. That seems to be at the heart of this book, so its a bit strange to get an issue like this, which is focused exclusively on Kid Gladiator. But all the same, as an “extra” issue, it kind of does make sense in the end, particularly when by all accounts writer Jason Aaron is bringing the character back after a long absence. In the end, this issue has my thumbs-up. 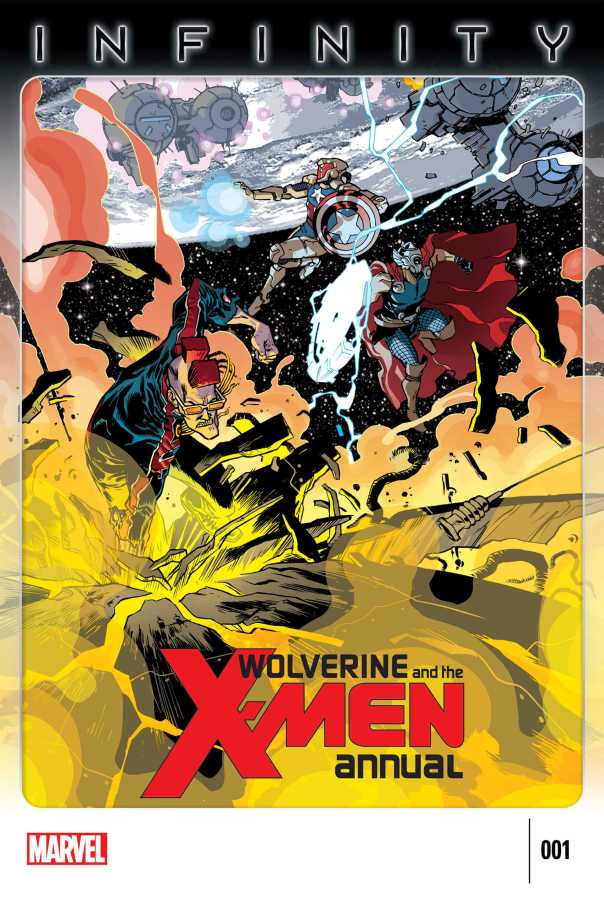 As I’d never read any X-Men comics prior to finally getting a start with Brian Wood’s X-(Wo)Men and then the other books with Battle of the Atom, I had no idea who Kid Gladiator was. I read Wolverine and the X-Men #38 the other day, where he showed up for the first time (for me) and he was kind of interesting given all his temper tantrums and his massive ego. Chronologically, the annual take place before that issue, so that’s something you have to keep in mind when reading either of them. The annual places him back in the Shi’ar Empire, where he attends the Imperial Academy and we start off with him giving a report to his teachers of the time he spent on Earth. Interesting to see how his views differ from those of Hulkling over in Kieron Gillen’s Young Avengers, who is another alien youth living on Earth with some of its superheroes of his own age.

This issue does a lot to flesh out Kid Gladiator’s character. We get a very in-depth look into him and through him, at the rest of the Shi’ar Empire. For someone new to all this, this is quite valuable world-building and I enjoyed it for it was. There are some great beats that Jason Aaron hits in this issue and he keeps everything moving forward without any long breaks in between. There’s a pacing problem here however since the second half of the issue is dominated by several dialogue-less pages which are just one action scene after another. Their intent is unmistakable but I couldn’t really get into them since I lacked all proper context. And they seem almost as an afterthought, to justify the Infinity logo on the cover.

There were areas where the issue could have been better, such as showing how the relationship between Kid Gladiator and his father, Majester Gladiator, develops, but by and large this was quite a fun story that is largely character-driven. Some expected events are in here of course, but the execution of those ideas is handled well enough.

Nick Bradshaw is the penciller for this issue, with Andres Mossa on the colours and Clayton Cowles on the letters. In comparison to Wolverine and the X-Men #38, the art in this issue was much better. Bradshaw has a huge scope in this issue and he has to do a lot of the creative world-building, given all the diversity of the Shi’ar that needs to be shown for the pages set in the Imperial Academy and then the battles later on when Kid Gladiator battles the Builder fleets alongside his father and other allies. Of the latter, they are all instantly recognizable and familiar, so its great that Bradshaw stays true to how they are portrayed elsewhere. Mossa’s rich and vibrant colours enhance the entire affect, but they are a bit too… spotless, clean, especially in the battle scenes. Some roughing up everywhere would have been far better.

Overall, I enjoyed the issue and would like more.