There are a lot of new series that I’ve started on this year, to varying degrees of entertainment, and I have to say that a very small handful of those have been as good as Jimmy Palmiotti’s Painkiller Jane, a series featuring a former cop named Jane Vasco who was created by Jimmy himself back in the 90s and has even been adapted for television. I read the first issue of the new series last month and I was quite impressed with it. It was an unrestrained bag of fun and entertainment, and my expectations from the second issue were high in that respect.

And the second issue does deliver, as it turns out. There are a lot of things that happened in the first issue, which featured a ton of action all throughout, and while the second issue is a bit light on that front, it is by no means any less impactful. Jimmy explores both Jane and Saudi heiress Sabina here and its a narrative touch that I really liked. There’s a lot of chemistry between the two of them and its great to see that addressed. 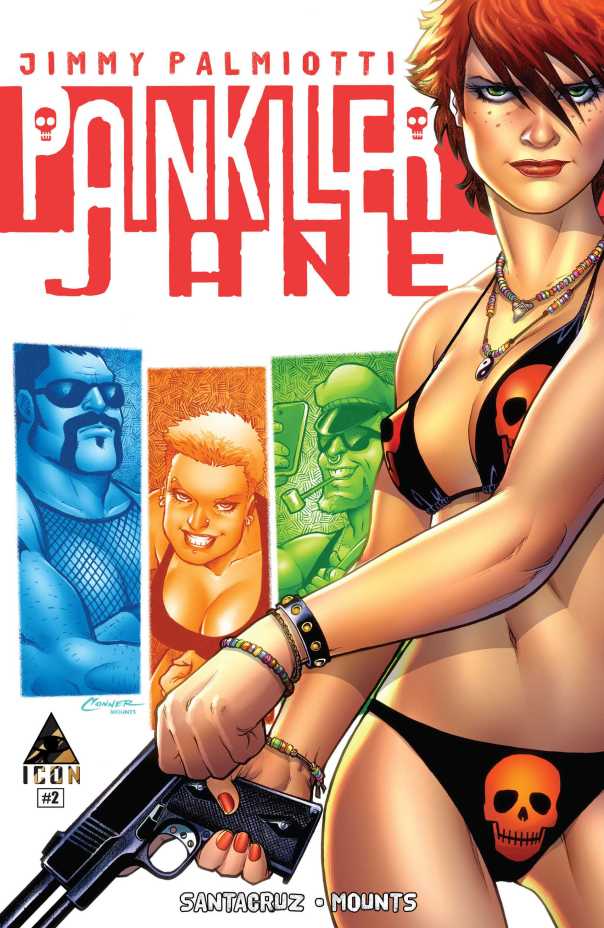 One major criticism that I have of this issue is that there isn’t a whole lot of story progression here. We are essentially stuck pretty much at the same point where we left off in the previous issue and the entire mystery of who wants to kill Sabina so desperately isn’t addressed here at all. This was disappointing, especially since I’d been looking forward to the opposite. Given that Sabina is a Saudi heiress, there are a lot of avenues of exploration available in terms of the story and I was really hoping that we’d see see something on that front. Alas, we don’t.

But, other than that, this issue proved to be really good. For a start, there are some great one-on-one action scenes here with Jane. The first one takes place in quite an unexpected environment, and it did have some humour value as well. What impressed me most however was just how lethal Jane really is in hand-to-hand combat. She takes as good as she dishes out and there’s never a moment throughout where you get the feeling that maybe she can’t do what the job calls for, whatever that may be. Ultimately that’s the major selling point of the series, its action, which is drawn really well and choreographed really well, both.

And the important thing here is that the violence never does seem gratuitous, but flows out naturally from the script at every turn. With a character like Jane, it would be quite easy to include a lot of violence as a matter of course just for the cool or wow factor. But Jimmy stays away from all of that and he gives us violence that informs on the characters involved.

Something else that I really enjoyed was the entire conversation between Jane and Sabina, where the two of them bond with each other, making it all the more easier for them to trust each other. Sabina’s egotistical attitude definitely gets to take a backseat this time around, and it leaves Jimmy with a lot of room to work on her character, giving her a deeper characterisation so that she doesn’t come off as pretentious or casually callous any more.

As with Jimmy on the script, the artists also do a great job with the artwork in all respects. Santacruz has a great eye for the action scenes and his hand-to-hand action pages involving Jane are some of the best that I’ve seen in comics. He packs those scenes with a lot of vibrancy and realism so that they never seem stale, quite the opposite in fact. In general, his character-work is fairly top-notch and with the kind of story that Jimmy is telling here, I think Santacruz’s style works well to complement it rather than continuing to find excuses with any of it. As with the pencils, so it is with Paul Mounts’ colours, which are just as rich and striking as far, helping each panel and each page stand out.

Thankfully, Painkiller Jane avoids the dreaded sophomore slump and continues at pace with the new issue. I was expecting it to be good, and it was definitely that. Now to just wait another month, when the third issue comes out.