In an action-oriented anime like Arpeggio of Blue Steel or any of the Gundam series, it is always vital that the anime deliver on that promise and that the action scenes always be tense affairs with a fair sprinkling of tactics and strategy. This lends an air of realism to the anime and enhances the viewing experience, at least for me. In its pilot episode, Arpeggio delivered on that promise quite handsomely, more so for the fact that it featured extensive naval combat, which isn’t something that’s all that common really. And it did a fair job of introducing all the characters and the premise itself, so I was definitely interested in sticking with the anime for a while.

I saw the second episode last night and while it was a bit thin on character progression and even on story progression, it did satisfy some of my urges and held my interest from start to finish. The very fact that the anime features so much naval combat, on the same level as Gundam SEED and Gundam SEED: Destiny means that I’m liking it for the most part despite some of its flaws in the animation department. The anime looks visually appealing, quite a bit, but there are times  the CGI fails to impress despite all the great little quirks.

At the end of the previous episode, Chihaya Gunzō and his crew aboard the repurposed Fleet of Fog patrol ship I-401 had been tasked with ferrying important secrets from Japan to the US and resupplying at the Yokosuka Base as well. But, the Fleet of Fog heavy cruiser Takao had also become aware of this and planned to cut off the I-401 before it could reach Yokosuka. And that’s what this entire episode is about. The two ships engage each other in the middle of a storm and when the story starts, the heavier ship has already taken out a number of the decoy patrol subs that had been seconded to the I-401. Now all that remains to be seen is who wins out in the end.

Like I said, this is a very action-oriented episode and almost the entire story consists of the Takao ambushing the I-401 and the naval tug-of-war between the two to see who wins in their mission. As someone not versed in naval tactics, its easy to overlook any potential deficiencies in the action choreography since they never even registered for me. All throughout the episode I was rather enthralled by the naval-speak, which built up the atmosphere wonderfully, and the ways in which Chihaya and the Takao outwit each other. There’s always an ace up the sleeve and it keeps the tension ticking along.

There are two important moments in the story where Chihaya and Takao exceed themselves as characters. The first is when Chihaya discusses with Iona the nature of the Mental Models, the AI of the Fleet of Fog ships such as Takao and I-401’s Iona. They are weapons, to be used by their commanders as they see fit. I paraphrase rather simplistically of course, but Chihaya betrays a very deep understanding of the Mental Models throughout the episode, particularly in that scene with Iona. It was rather fascinating. The second moment is towards the end and involves Takao when she is discussing the outcome of the battle against the I-401 with the avatar of another Fleet of Fog warship, someone much higher on the totem pole. Takao is the one character who really improved throughout the episode, going from an almost stone-cold killer style mentality, someone who cares only for the destruction of the enemy to someone more than that. The episode shows that there are depths to her character and the promise is there that these depths will indeed be explored further. 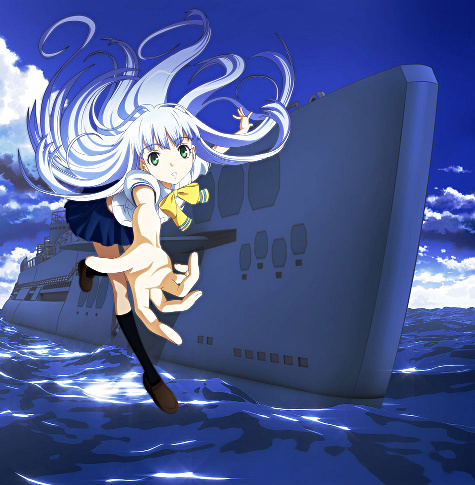 At the times, the animation is off, such as in the case of the characters’ faces and what not. Not to mention that there aren’t a whole lot of things here that actually do stand-out and do amaze you. Given the kind of show that it is, I expect more from Arpeggio. But all the same, the naval action is superb, as I mentioned last time. The entire aesthetic of the hull designs of the Fleet of Fog warships are well-realised and the colouration differences between them help to distinguish them. And when the Takao plays its ace in the hole in the first half of the episode, the… transformation is rather excellent. Unexpected indeed, but also quite thrilling.

I kind of like where the story seems to be headed. The anime is based on a manga, so there are some expected beats to be met, but since I haven’t read the manga, I am coming into this whole deal with a fresh perspective. I know a little of what is going to happen thanks to some minor spolers on Wiikipedia and the discussion I’m following on an anime-related forum, but I’ve taken care not to expose myself to too many spoilers. Looking for episode-specific discussions helps.

But either way, I find Arpeggio of Blue Steel, or Aoki Hagane no Arupejio, as it is known in Japan to be quite an exciting show for the most part. I’m certainly enjoying it and I’m hoping to have the next two episodes done with quite soon.