The ninth pick for the “12 Days of Best Covers of 2013″ list is the cover for Martha Well’s latest novel, a Star Wars tie-in for the new Empire and Rebellion series, The Razor’s Edge. This new series takes place after the original Star Wars movie and continues the adventures of Leia Organa, Han Solo and Luke Skywalker in those early days of the Rebellion. It was a really fun book that did much to add to the mythology of these characters and add to the overall Star Wars lore as well. The most fun part was in seeing how these characters continued to interact after their victory over the First Death Star, and the primary protagonist was Leia herself, one of my favourite female characters in SFF.

The ninth comic cover that I pick is Nick Runge’s excellent cover for the first cover of J. W. Rinzler’s adaptation of George Lucas’ original script for Star Wars, The Star Wars. I’ve read the first three issues of the series and they’ve been quite interesting and fairly good. They betray a much more fantastical tone to the entire setting and its evident that George Lucas’ imagination really did run wild for that initial attempt. I’d definitely recommend the series!

Without further ado, hit the break to see both the covers in all their glory! The full list of all these covers is available here.

Why: This is unlike the covers that I’ve featured so far, but I still enjoy the “realism” of it because I consider Leia Organa to be one of the best female characters in all of science fiction and fantasy, and this cover shows her off in a very badass context, which is just great because that is certainly at the core of her character as she develops over the various movies and novels and comics and what not.

The Star Wars #1 by J. W. Rinzler and Mike Mayhew 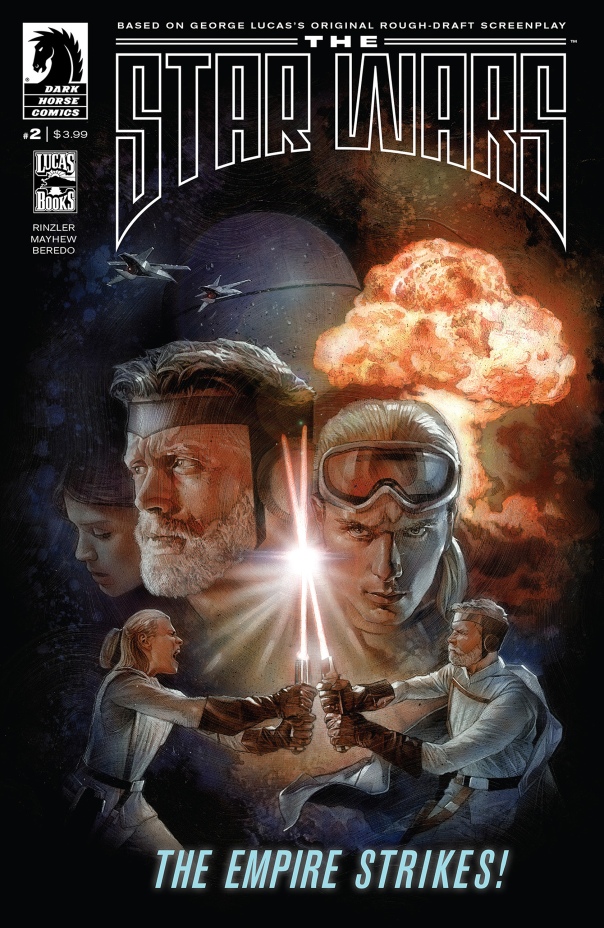 Why: As with Alex Ross’ mind-blowing cover for Brian Wood’s Star Wars #1, so it is with this cover by Runge. It is almost a classic Star Wars cover, in the movie poster style, but since all the characters are different, much different, this cover has a unique charm of its own and its just awesome all over.