The new year might have come but comics are still dealing with ongoing events that began last year, and one of these events is Forever Evil by DC in which the world has been taken over by the supervillains and evil is everywhere. Tying into this larger event is an 18-part mini-event Forever Evil: Blight which deals with the goings on in the supernatural world and concerns the remnants of the Justice League Dark as per their reformation since October last year and DC’s mythological (New 52) heavyweights Pandora and the Phantom Stranger. Till now, I’ve read only the Phantom Stranger and Justice League Dark issues of the crossover, both written by J. M. Dematteis but I have to say its been quite a fun time and Phantom Stranger #14 ended in a really good place.

Phantom Starnger #15 carries on directly from the ending of Justice League Dark #26 from the previous week, and its actually quite exciting to see this entire story develop. Having read the new issue, I do feel that I should really catch up on Ray Fawkes’ Pandora and Constantine since there is finally a lot of crossover between the books, with references being thrown back and forth, but still, I feel that if you are reading both Phantom Stranger and Justice League Dark then you are good. You’ll get the story here and you won’t be lost. Plus Fernando Blanco, Miguel Sepulveda, Brad Anderson and Travis Lanham’s art is pretty good too.

Note: This review contains some minor spoilers about the issue. 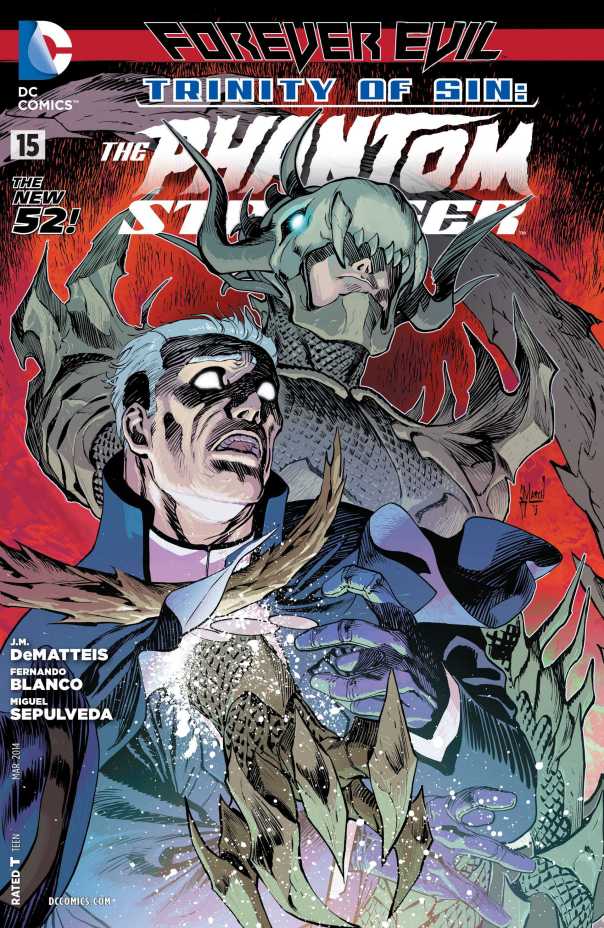 Ever since DeMatteis came onto this series, it has become one of my favourite books from DC and he’s been doing some really great work with the character, developing into a more three-dimensional person that I can relate to in a way and also giving us a lot of character drama through his interactions with everyone around him, particularly the Justice League Dark where the current roster of the team is concerned.

In the previous issue of Phantom Stranger and Justice League Dark #26, we saw the heroes go up against Blight and fail spectacularly. Now they are trying out something different, but in the midst of all of that, God has told the Stranger to side with Blight for the greater good, because he has plans and everything happens for a reason. This issue deals with all of that and really gives us a window into Stranger’s soul so we really get to see the man inside, the man who repents what he did two thousand years ago and wants to atone for it by helping people in any way that he can.

But this new decree is not something he can live with, and his struggles in the second half are a defining element of this issue. The internal conflict of the Stranger is one of the biggest draws of the series for me and it is an element that DeMatteis excels at exploring narratively. This issue additionally highlighted how the Stranger has befriended people before and then betrayed them, for one reason or another, whether willingly or unwillingly. That’s what I love most about this comic. He sides with Blight here because he is ordered to, but then he rebels and ultimately he decides to take things up with the Power That Be.

How cool is that?

But the Stranger isn’t the only character here of course. We see a lot of dialogue from Blight himself this time, through his possessed host Chris, someone that Stranger brought back from the dead a few issues back by going into heaven and finding his soul there, adrift and aimless, stuck in a sort of limbo in a pre-heaven state. Blight’s characterisation is pretty excellent, with his character and the Stranger’s playing off each extremely well.

Then we have Constantine and the others as they continue to try to find the whereabouts of the missing members of the team, Constantine’s original team, and take care of a recuperating Boston Brand aka Deadman who we saw in Justice League Dark #26. The focus is almost always on the Stranger and his struggle but in the end, DeMatteis spotlights all these characters as well and sets up the storyline for the next installment in the crossover. It is a great cliffhanger and I definitely can’t wait to see what happens next.

Blanco, Sepulveda, Anderson and Lanham’s art is almost off-the-charts here. Blight makes for a pretty badass villain here in this issue and his action scenes against Stranger are something to remember for years. This isn’t the brawny fights as you are likely to see in a title like Superman or Aquaman but something much more… relevant. Blanco and Sepulveda (the latter being the guest artist for three pages here), have a great sense of storytelling here and their styles fit with DeMatteis’ script right down to a T. But what’s great is that being a story about evil and a blight, the art plays up those themes fantastically. In any scene involving Blight there is a very heavy use of a dark/dark-pale palette that enhances both the tone and mood of the heroes, and that’s what’s so golden about the whole thing. Anderson really outdoes himself with this issue.

So overall, a damn fantastic issue. There are some references to previous issues of Constantine and Pandora, but I don’t think that those are absolutely essential reading if you are trade-waiting or something. Phantom Stranger and Justice League Dark are perfectly paired up however and I would suggest reading both right now.