As you might well know from the reviews I’ve been posting in the last few months, Red Sonja is one of my favourite female characters in comics and with Gail Simone on writing duties for her with Dynamite’s latest relaunch, things are on the up and up for her. She’s always been a character that I enjoy reading about, and this past week Dynamite released a one-shot called Li’l Sonja which reimagines the fiery redhead as an all-ages kids character, very much in the same vein as, say, Powerpuff Girls or Li’l Gotham or Itty Bitty Hellboy.

I just read the issue a few minutes ago and I got to say that it was a lot of fun. Knowing that it is all-ages and being a little familiar with Jim Zub’s writing style from his Samurai Jack comics with Andy Suriano and Josh Burcham for IDW, I knew that I would be in for a treat here and I wasn’t disappointed. Honestly, if Li’l Sonja was a cartoon being aired in the mid-90s, I would have totally been watching it. Honest truth! Jim’s writing is great and the art team has done a great job as well. 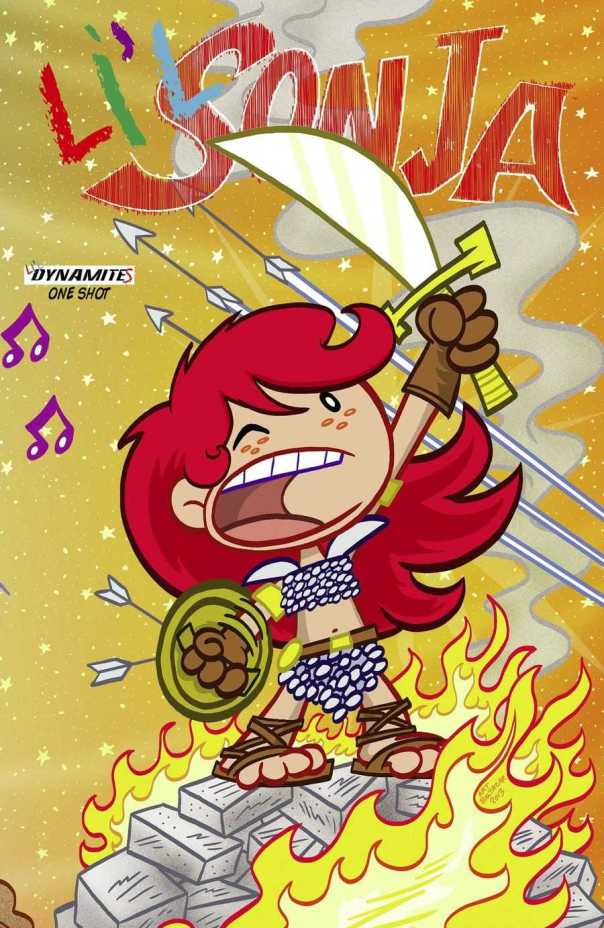 That cover art that you say is done by Art Baltazar, who is quite a favourite in the all-ages circle as both an artist and a writer. He is also a writer on Dark Horse’s Itty Bitty Hellboy, of which I’ve read the first issue and have enjoyed that as well. I’ll admit that the fact that Art did the main cover here and that Jim wrote the story are two of the reasons that I picked up this comic. And that this is a Red Sonja comic. Otherwise, I probably wouldn’t have been interested in this apart from a passing curiosity, admittedly.

The story here is quite simple really. After Li’l Sonja kicks some goblin butt in the forest, she makes her way to a small town and arriving there she finds out that there have been kidnappings and robberies there. The connection: everything that was taken, organic or not, was red. And since she is a redhead, well, the conclusion and setup there is obvious.

All throughout Jim’s dialogue and narration are both pretty spot on. The writing it a bit too… modern than what I expected, but that’s fine too, considering the audience and the primary target demographic. And I’ll say that I do like the simplicity of it all. Its nice to read a comic where its all about the sheer fun of the story and that there are no grandiose speeches or layered dialogue or nuanced plots. What you see is what you get.

Additionally, what it all boils down to, is that Jim’s Sonja is very cute and exciting character. She is brave as only a kids’ hero can be, utterly unafraid of challenges, no matter what their shape or size. She is feisty, she is smart, she’s kickass. That’s what I was looking for here, and that’s what I got. The way that Jim ends the story, I’d love to see a follow-up of some kind, because I enjoyed the story here and I honestly think that there’s a potential for something more than just a one-shot. Perhaps a six or eight issue mini-series. So, Jim Zub and Dynamite, if you are reading this, you know what you gotta do!

Joel Carroll is the artist here, with Andrew Elder doing the colours and Simon Bowland doing the letters. The credits page, done in crayons, is absolutely fantastic and also a bit unexpected. I certainly wasn’t expecting the comic to start off like that. And all throughout, the art really holds up. To get over the fact that the “true” Sonja wears a chainmail bikini, Joel has given her a sort of adventurer’s robe that she wears under her armour. Its a neat way of getting around that obstacle and I applaud him for it. The rest of the issue is certainly done in a very cartoony style which, again, totally fits the tone and nature of the issue. That is one of the reasons why I said that I’d love to see a Li’l Sonja cartoon. I think there’s some good potential for that.

In the end, all I’ll say is thanks to the creative team and the editors and everyone involved for doing something like this. It helps break the regular cycle and its a good switcheroo.