← Student of The Year: Class Is Out
EVE: True Stories #1 (Comics Review) →

My first ever experience with Tomb Raider was this one PC game demo that I got off a magazine CD. I remember it clearly because I just ran around the starting area with no clue as to what to do. I just couldn’t find a way out. Then years later, I saw the two movies featuring Angelina Jolie. They were good, decent, but hardly exciting fare. Then again years later, when I finally got a Nintendo DS in college, I bought a Tomb Raider game on a trip to San Francisco for a gaming convention. And it was fun. A lot of fun. I’ve still got it, even though I haven’t played it for like 4 years now.

Last year Dark Horse announced that they would be doing a new Tomb Raider comics series and that this was going to be set in the aftermath of the recently released video game with the rebooted continuity. I was excited. I hadn’t played the game but the comic was going to be written by one of my absolute favourites, Gail Simone, and that’s all that I wanted. This week, the first issue got released, and it was everything that I wanted out of it, and more. And the art was quite good as well. Very different to what I expected but good nonetheless. 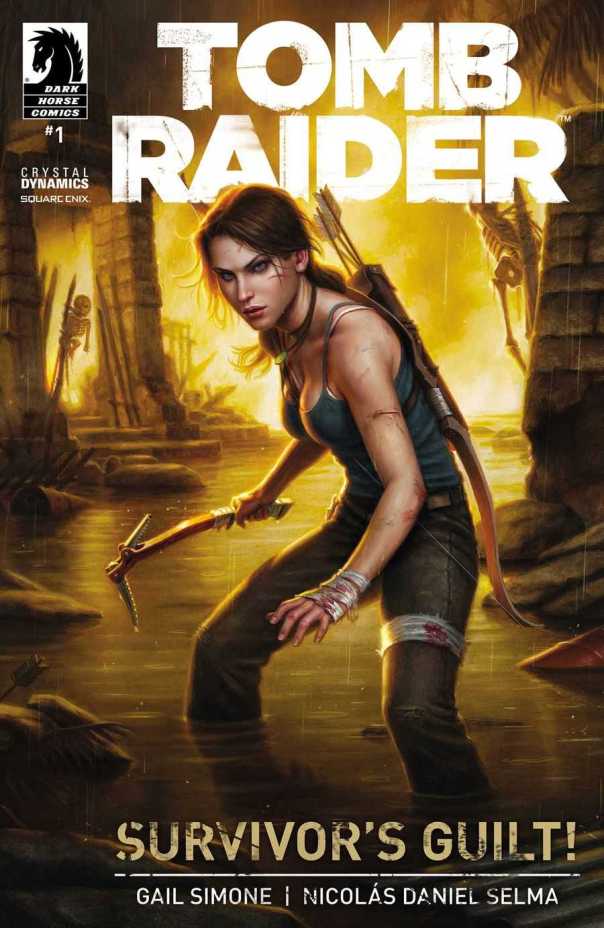 Most people are no doubt going to be familiar with the high sex appeal version of the character that was popular in the comics and the games during the 90s. She became very much a sex symbol globally in those years and though it did contribute to the issues of sexism and misogyny in the industry at large, Lara Croft is still one of the most iconic female fictional characters of all time. Last year, Crystal Dynamics and Square Enix rebooted her entire continuity to start afresh, and the result was one of the most critically acclaimed and bestselling titles of, like, the last decade. Lara Croft returned to computer screens in a new avatar that built on her as a person, and not as an object of sex appeal. I have yet to play the game sadly, but I’ve definitely observed it from a distance and I’m quite taken with the new Lara.

And this is the Lara that you see in this comic. It is set after the events of the video game and reportedly this is going to lead in to the sequel at some point. The comic gives us a rehash of the events of the video game, which was good in that it helped me to catch up with the entire story, and then it launches into the main story here, in which Lara deals with PTSD and learns how to keep her connections with her friends open. There is a lot of character drama to unpack in this issue. Some of the dialogue feels a bit flat, but overall, I really enjoyed Lara’s voice here. The way that Lara is right now reminds me a lot of what Barbara Gordon aka Batgirl recently went through in her solo series for the Wanted arc, which was also written by Gail Simone. So there’s a nice symmetry there.

Of course, Gail gets much more of a chance to really delve into the character since she isn’t restricted by quite the same constraints as she is in a Big 2 title. There are different constraints but they don’t appear to be as rigid. Tomb Raider #1 is a comic about the character, dealing with the character’s feelings and emotions and life and how the character deals with traumatic events. It was all pretty damn good if you ask me!

Where the art is concerned, we have Nicolás Daniel Selma on the pencils with Juan Gedeon on inks, Michael Atiyeh on colours and Michael Heisler on letters, with Dan Dos Santos doing that amazing cover art. I liked the art in this comic. It doesn’t quite have the gritty feel of the video game itself, but that’s fine. Some of the action scenes don’t feel quite alright, in that they appear… staged, which was a bit weird, but nothing that particularly distracted me from what was happening with the rest of the story. And as for the colours, a bit bright for my taste, but good nonetheless. They have a very… warm feeling to them that I liked.

Overall, a good start for what will hopefully be a long-lived series!

← Student of The Year: Class Is Out
EVE: True Stories #1 (Comics Review) →