Aquaman is one of those few DC books that nicely mixes in humour with otherwise dark events, and even just events with a huge scope at that which deeply and personally change the world-view of the characters irreversibly. But at the same time, Aquaman’s story is one about hope and determination. At several times during his run, Johns emphasised this and ran with it as far as he could take it. It proved to be a really good time. And now it looks like the new writer on the team, Jeff Parker, is cut from the same cloth because that’s pretty much what Aquaman #28 was all about.

In his first two issues on the title, Jeff worked to expand the scope of Aquaman’s world, introducing new characters and new monsters. And he did it in pretty good style too. Now in Aquaman #28 he finally makes two worlds collide as Aquaman finally learns of the newest threat to Atlantis, involving another conspiracy against the underwater empire. I really must say that I enjoyed this issue as much as I did the previous two. On the art side, I didn’t like it so much, because Aquaman and some of his supporting cast looked a bit beefed up and they didn’t look like their previous incarnations either. But it was overall still good. 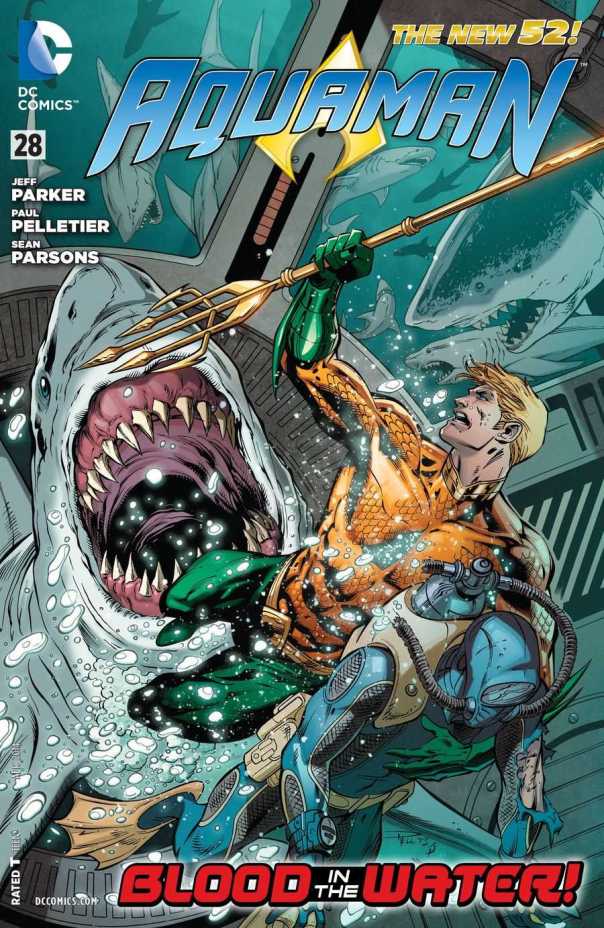 Whereas the last two issues served to establish Jeff Parker’s credentials and the tone of his run for the series, this issue takes several steps further on to establish the scope of his goals for the title and what kind of a long arc he is expecting to run with. In the last issue, Aquaman defeated a monster straight out of Atlantean myths but as we saw at the end, there was some interference from a human interest group which operated in a veil of secrecy and maintained an underwater base for its experimental purposes.

And now we see what happens when Aquaman and this group meet. There is a lot of supercharged action in those scenes and they serve to further develop the hero and what priorities he has for his rule over Atlantis. Not only that, but these scenes also show how trigger-friendly people still are after the events of Throne of Atlantis in which, under Aquaman’s step-brother Orm’s leadership, Atlantis attacked and invaded the surface world. It was a rough time for both worlds and the effects are still being felt. I loved seeing an Aquaman who is all for better relations between the two worlds but who is also not afraid or hesitant to challenge those who want otherwise.

But we see much more in this issue. The first half deals with politics and action in Aquaman’s world. The second half deals with memories and having that one personal connection to the past. It also involves a lot of humour. All I can really say about this part of the issue is that it was great to see a very down-to-earth side of Arthur Curry, to see how his childhood was and how his Atlantean legacy coloured those years of his life, how they changed him. And in a bit of subtle twist, this half of the issue also connected with how the people of Amnesty Bay see Aquaman. Many of them remember an earnest young boy. Many of them remember a friend.

And Mera was the best part of the second half, with all the antics she did to give Arthur a hard time at the school reunion where all this takes place. Quite fun really.

This also feeds back into the subplot introduced by Jeff in which a reporter has come to Amnesty Bay looking for info on Aquaman, but has been stonewalled by the people. I am honestly looking forward to seeing how this is developed further on, given the specific events that happen in this issue. This is turning out to be an interesting mystery.

On the art side, we have some changes on the art team. Inker Andrew Hennesy is brought in for two pages to help regular inker Sean Parsons. Netho Diaz is not in this issue, which means that Paul Pelletier does all the leg-work. Jeromy Cox is the colourist in place of Rod Reis and Dezi Sienty is doing the letters instead of Steve Wands.

Given all the big moments and the small, I enjoyed this issue. I love how easily Paul Pelletier can switch from either style/scene to the other, and I enjoyed his art overall. But some of the scenes with Aquaman didn’t work for me so well, because Arthur in this issue looks more like a wrestler than he has ever done in this run. Where he used to be a bit slender and tall, now he was more a really solidly-built prize-fighter or some such. It kind of took away from some of the scenes. But the colours by Jeromy Cox and the inks were in top form as always, and generally helped improve the artwork.

The issue ends on a 1-page subplot which is like an epilogue to the whole thing. It serves to set up the upcoming Rise of the Seven Seas crossover that will happen soon enough between Aquaman and Justice League, something that I’m really looking forward to later this year. The dialogue on this page was a little stiff, but I liked the thrust of it well enough. We shall see how future issues pan out, but for now, I’m quite happy where Aquaman is going.