For this new seasonal end of year list, the first book cover that I pick is the second novel in the Night’s Masque series by Anne Lyle, published by Angry Robot Books. Anne’s first novel, The Alchemist of Souls, was one of my first Angry Robot reads last year and it got me hooked on to reading more of the publisher’s output. The cover for that novel too was rather excellent and that success was repeated for the second book in the series.

And the first comics cover that I pick is the first issue of Brian Wood’s Star Wars from Dark Horse Comics. As a life-long fan of the entire setting, it is one of the best covers I’ve seen to date and its what got me started on really reading again all the different Star Wars comics, regardless of where in the setting they are set. And it also gave me a good solid taste for the kind of books that Dark Horse puts out each month.

So without further ado, hit the break to see both the covers in all their glory! The full list of all these covers is available here.

END_OF_DOCUMENT_TOKEN_TO_BE_REPLACED

Doctor Who: The Day of The Doctor 50th Anniversary Special (Podcast Chat) 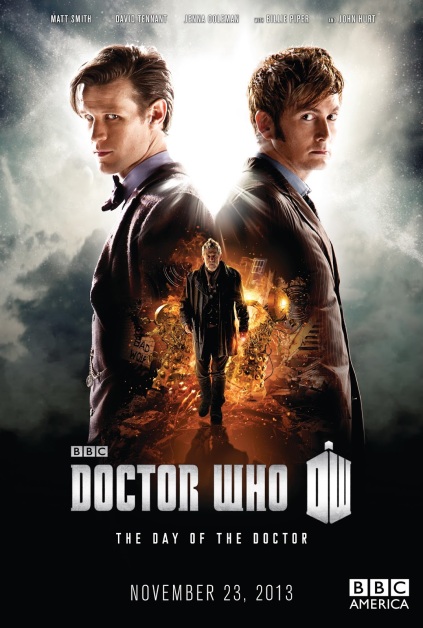 This is going to be a very short post. Just over 2 weeks ago I posted a review of the 50th Anniversary Special episode of BBC’s Doctor Who, one of the world’s longest running television shows. It was my first ever episode of Doctor Who and, in a nutshell, I quite enjoyed it.

This past weekend, I made plans with a couple of friends to do a podcast together and talk about our experiences. Paul (blogger extraordinaire for the Hugo-winning SF Signal) and Sally (chief editor of The Qwillery) are both far more experienced Whovians than me, and they’ve been watching the show for years. We had a really great discussion and I enjoyed chatting with them about the show and the episode in particular. Of course, I listened to these two get into the nuts and bolts of various things more than talking about it, but it was fantastic.

Always great to be able to discuss current shows with people.

Sally was kind enough to upload the audio file of our chat to SoundCloud and get that up and running. So here is the link (and here is Sally’s own write-up). Hope it is a lively discussion.

Doctor Who: The Day of The Doctor 50th Anniversary Special (TV Show Review)

I have, admittedly, never seen an episode of BBC’s Doctor Who. A few years ago, back in college, I once made a list of some really popular SFF shows and at the top of the list was Doctor Who, but I was somewhat turned off by the fact that the show had been going on since the 1960s or thereabouts. I was rather clueless at the time and not much aware of the whole “seasons” nature of television shows in the western media. In India, television shows are broadcast 5 times a week for the most part and so the old-me couldn’t get around the concept of a show that had been alive for more than 40 years. And I didn’t really know any Whovians at the time either, so that was a factor as well.

Recently I’ve had an urge to start watching the show, mostly because a large number of my friends on social media are from Britain and most of them are Doctor Who fans, aside from friends of other countries with similar interests. With the 50th anniversary of the show this year, I thought I’d finally get onboard the whole thing and so I decided to watch the 50th anniversary special yesterday. And it turned out to be a darn good episode, for a first timer to the entire franchise.

END_OF_DOCUMENT_TOKEN_TO_BE_REPLACED

Kicking off the fourth week of Names: A New Perspective is author Anne Lyle who has been making waves this year with her debut novel Alchemist of Souls, an awesome alternate history set in Elizabethan London in which explorers have discovered a race of magical beings, the Skraylings, inhabiting the Americas (my review). Like all the debut authors I’ve featured on the blog so far, she is another one to watch out for, one you can expect more awesomeness from. I do have an eARC of her second novel Merchant of Dreams sitting on the laptop waiting to be read and I’m looking forward to it, although it will be a while before I get around to it. Here’s what Anne has to say on the topic of names and characters in her novels.