About three weeks ago, I wrote a post about my plans for my NaNoWriMo project for this year, an Indian space opera story tentatively called The Veergati Codex. I talk about it in some detail here. That post also talked about some of the negative reactions I’ve seen against the entire event, established authors basically deriding the efforts of the “dilettantes” and the “dabblers” since “real authors” write all year, not just for one month a year. Its a fair criticism I guess, but its undeniable that many of the published authors of today are these same dilettantes and dabblers who’ve made it big. I know of at least three currently published authors, from major publishers no less, who took their first steps with a NaNoWriMo event and have reached all the way to where they are now. So the derision this year really rubbed me the wrong way.

But anyway, that’s not what this post is about. In the previous post, I’d said that my goal for this year was to do 30k words instead of the usual 64k+ I’d pulled the last years. With some personal things going on, not to mention some other commitments and my reading, I couldn’t afford to spend that much time on the writing for the event this year. I was all resigned to it too.

But then the first day came, and I was a mean writing machine, if I do say so myself.

END_OF_DOCUMENT_TOKEN_TO_BE_REPLACED

In just a few short days will begin another Nation Novel Writing Month where tens of thousands of people all over the world will make a head-start on their novel projects, aiming for a monthly word-count of 50,000. Thousands will fall way short. Thousands will make that target, and thousands still will surpass that and end up much higher. From personal experience, its been *relatively* easy for me to break past the goal. In my first year, in 2011, I ended the month with a word-count of 65,866. In my second year, in 2012, I ended the month with 64,001 words committed. But this year, its going to be much different.

There are certain personal things going on that make it a impossible for me to be able to carry on this level of productivity this year. And its not just one thing, its a lot of different things, none of which are the topic of discussion here. Simply put, I’m aiming only for 30,000 words by the end of the month and even then I’m doubtful if I can make it.

No, the topic of discussion here is the reaction of some published authors with respect to this yearly event. To sum, its derision and arrogance and dismissal of the efforts that people make in November every year for this event. And that is something I have a big problem with.

END_OF_DOCUMENT_TOKEN_TO_BE_REPLACED

So once again, these monthly reports are delayed big time. They are just so onerous to write that sometimes I just don’t care really. But I do them regardless because they happen to serve as a good check on my writing, especially when I lose track of things, as I am often wont to do, for no reason really.

I still can’t seem to find the right frame of mind to work on anything fictional, while my non-fiction work and my editorials continue apace. Its really weird. You can find the June/July Report here.

END_OF_DOCUMENT_TOKEN_TO_BE_REPLACED

So it has finally happened for really realz.

As I’ve blogged several times already, I have finally been able to get a short story published. Titled Dharmasankat: Crisis of Faith, this short story is an Indian Urban Fantasy sometime in the 1800s and acts as an origin prequel to my novella Dharmayoddha: Warrior of Faith, for which I’m still hunting for a publisher, without luck. There will be a follow-up novel Dharmachakra: Circle of Faith at some time in the future once I’m done with my current novel WIP Cloak of Secrecy.

Manifesto: UF is now available through Amazon as a digital book. You can purchase it here. I haven’t yet had a chance to read the anthology myself, but I will be correcting that first thing next month, and I’m really looking forward to it. I’ve read full novels by several of these authors already and I’ve been fairly impressed with their work. And all props to editors Tim Marquitz and Tyson J. Mauermann for putting this anthology together and taking a chance on an unpublished writer like myself.

I hope that you, the readers, will look favourably on the short story. And even if not, thanks for reading all the same. That’s the least I could ask for. 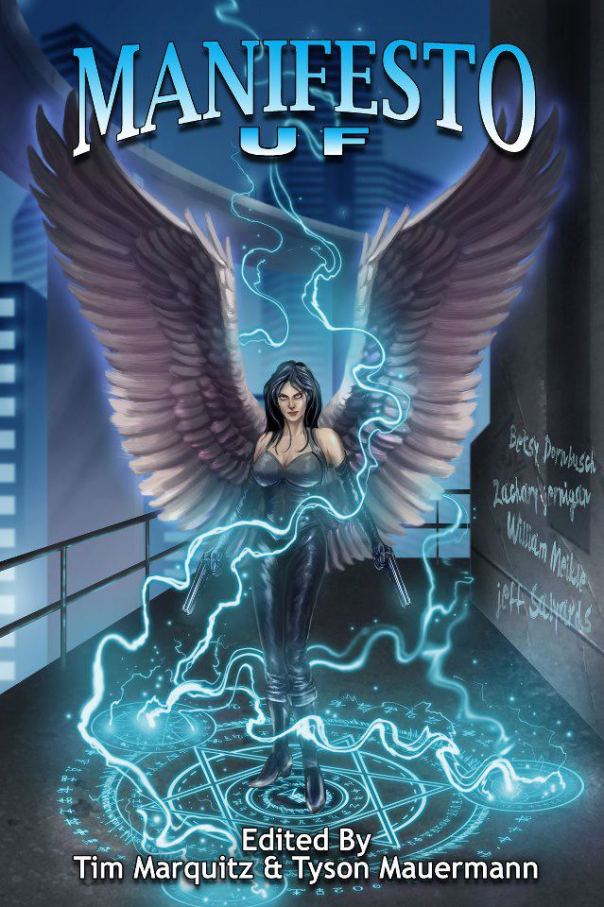 At this point, its becoming more apparent to me that sometimes I just can’t be bothered to blog about certain things, and the last two months have kind of shown that. As did the April/May monthly report. I’ve been struggling to get these out on time for no real reason other than just a general procrastination-related disinterest. Which is bad. Productivity is down and I really need to step things up desperately.

June wasn’t actually that bad but there were far too many things going on in July for me to focus on my writing, especially fictional writing, as I detail below. You can find the April/May Report here.

END_OF_DOCUMENT_TOKEN_TO_BE_REPLACED

Monthly Report: April and May 2013

And once again it appears that I have failed to get one of these (or two rather!) out on time. The first couple of weeks in May were pretty tight since I was both working on edits for the novella while also working on the prequel short story, so that never happened. And once again, I just go too lazy last weekend to work on this. Weekdays just aren’t that good for me generally to do one of these things. Takes too much time. But can’t putit off forever, either, so here it is.

Lots has happened in the last couple months and this is how the writing and reading went down in both April and May. You can find the March Report here.

END_OF_DOCUMENT_TOKEN_TO_BE_REPLACED

Looks like I just might be getting the new report out almost on time! Three cheers for me! Well, sorta, but its the effort that counts, right?

March has been one of my busiest months of late, probably because a lot was happening throughout, and things are still extremely busy in light of some recent news that’s come my way with regards the publishing and comics industries. So expect to see a lot of content from me in April.

At least, that’s the plan!

So, this is how the writing and reading went down last month, and you can find the February Report here.

END_OF_DOCUMENT_TOKEN_TO_BE_REPLACED

The 2-year celebrations continue on! I was going to be posting this little sample earlier but some things came up and so I found myself super-busy. Anyways, here it is as promised, with a little bit of an intro to the project itself.

END_OF_DOCUMENT_TOKEN_TO_BE_REPLACED

This is quite a bit late, and I apologise for the delay. Lots of things going on this month, and not all of it good, so things have been off-schedule for a while.

In my blogpost titled “2013 – What Now? Some Resolutions Maybe?” I mentioned that I was not going to set myself any individual project word-count goals, and that my big aim would be to do 450,000 words for the whole year. January, on the whole, wasn’t all that great since there were two trips to India involved (one coming back in the first week, and another going there in the last week), so that crimped by writing quite a bit, not to mention that my slump and procrastination continued.

Try as I might, I can’t fix this stupid procrastination. There’s always something that comes up, that totally screws with my writing moment and I end up doing nothing. I have no idea how to get it sorted. The reading progresses great, just not the writing.

Eh, whatever. It’s still better than doing absolutely nothing for a whole month! So here’s how my writing and reading in January went down.

END_OF_DOCUMENT_TOKEN_TO_BE_REPLACED

So the New Year has come and gone. The end of the second week is almost upon us. And so far, it’s been a somewhat lazy, yet productive month. Also one that has been spectacular in a few ways. It’s also time to make some new resolutions and challenges. So let’s get to it.

END_OF_DOCUMENT_TOKEN_TO_BE_REPLACED

So, the year 2012 ended a few days ago, and it’s been an absolute blast, to say the least.

At the end of October, I was very close to both of those goals, having crossed the ~472,000-word mark, and was still ahead on the reading goals, as I was at 352/400 on September 30th. You can find the November report here.

END_OF_DOCUMENT_TOKEN_TO_BE_REPLACED

November ended a few days ago, and so far this year, it was my busiest month ever, in terms of writing; busiest by far, as you’ll see after the break.

At the end of October, I was very close to both of those goals, having crossed the ~377,100-word mark, and was still ahead on the reading goals, as I was at 304/400 on September 30th. You can find the October report here.