I’ve long been a fan of DC’s various animated projects. Whether we are talking about Batman or Superman, Justice League or Batman Beyond or what have you, I’ve enjoyed each and every series. Growing up, the first two series that I mentioned were a large part of my childhood. I watched (or rewatched) several of these series during my college days and I was reminded of why I loved them so much. They presented some definitive versions of the heroes in question, and each and every episode served only to draw me in further. It shouldn’t be a surprise really for you when I mention that I consider Kevin Conroy and Tim Daly to be the definitive voices of Batman and Superman respectively.

Since those good old days of the 90s, DC has put out several more animated series. One of those is Young Justice, which features the young sidekicks of many of the big-name DC superheroes. With an initial line-up of Robin, Aqualad, Kid Flash and Superboy, the show starts off rather well, although there are a few negatives that prevented me from really enjoying the first two episodes. 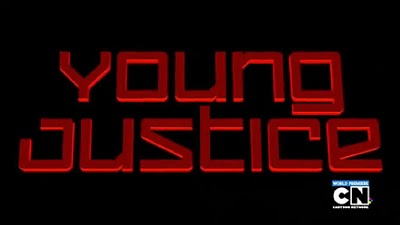 The first episode sees the soon-to-be-called Young Justice team being assembled. Aquaman, Batman, Flash and Green Arrow take down various cold-powered villains around the world with the help of their trusted sidekicks, and each “mission” ends with the line that “Today is the day”. This refers to these sidekicks finally being allowed into the Hall of Justice to become a part of the Justice League. However, things don’t work out that way because the older heroes only planned to give the younger heroes a tour of the place, which despite all appearances, is not the actual headquarters of the Justice League. That distinction belongs to the Watchtower, which orbits the Earth.

These revelations turn off Speedy, Green Arrow’s sidekick, most of all and he breaks all ties with Green Arrow and the other younger sidekicks. He wants to be treated as an adult, someone who can be depended upon, someone who can be trusted. He is not happy being treated with kid’s gloves. Aqualad, Robin and Kid Flash are indifferent for the most part, right up until the older heroes go off on a mission, leaving them to their own devices. From there, we see how the trio go off on a mission of their own without consulting their mentors, and how this mission involves them in the devious plans of the villainous organisation CADMUS which is in the process of perfecting a clone of Superman, called Superboy.

One thing I’ll remark on here, as someone unfamiliar with Superboy’s history outside of the extremely disappointing (New 52) comics by Scott Lobdell and Tom DeFalco, that I found this version of his origin to have been handled really well. It doesn’t dwell overlong on his origins and summarizes things very nicely without the need for long exposition of any kind. We get little in the way of Superboy’s motivations and his… beliefs, but the brief glimpse is very tantalizing and it certainly kept me very interested through to the end. 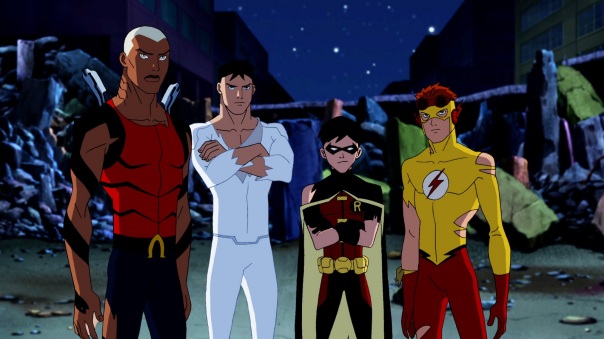 By the end of the second episode, we see that the impromptu team of these four heroes is finally starting to come together. We also see some revelations about the CADMUS operations as they relate to Superboy’s development and his genesis. Together, they all provide a very enjoyable experience. They kept me hooked right up until the end, to the point that I watched the two episodes back-to-back, at a time when I should have actually been working on something productive, like my writing.

However, there were a few negatives.

Second, we don’t really learn much about any of these characters, which was something I’d been looking forward to. The story dumps you in the middle of things and presents the characters as already established. Something like, which Robin is this Robin? Dick Grayson? Jason Todd? Tim Drake? Who is this Aqualad? He is shown to be Aquaman’s subject, clearly a favored one at that, but what is his relation to the King of Atlantis? I’m not actually sure if they mention who this Kid Flash is. I have a feeling that they did, but I’m going to go with not. Its the little things like this that make the experience more complete. The lack was a disappointment.

That’s really it though, at this point. I think the show has a ton of potential, it just needs to recognize that and just run away with it. As a show targeted for kids, its got all the hallmarks of the super-successes such as the Superman, Batman and Justice League shows, but there are things such as Aqualad, who are going to be very unfamiliar to kids. I only know the character second-hand and through association. How many people are likely to pick up on him as being an Atlantean and Aquaman’s protege? The opening two episodes don’t give a whole lot of explanations and that works against them. Sadly.

But otherwise? I think the show is off to a great start. I’ve already seen the next two episodes and I really enjoyed them. Especially with the added advantage provided to the team with the inclusion of Miss Martian, Martian Manhunter’s niece and sidekick. She joins the team at the end of the second episode, one the team is all formalized by acceptance of the Justice League proper. And I think it was a rather nice tough. The team is beginning to stand on its own, with the characters beginning to define themselves without the added weight of their mentors and all the charm and experience that they bring.

I certainly look forward to more!