A few days ago I did my best of 2013 list for the books I had read in the second half of the year. In a departure from previous such lists I divided the books and the comics into separate posts so that I didn’t have one massive post up. Massive posts are a bit tough to handle, especially when you are promoting them on social media. And with the split posts, the directions are different and there’s no unnecessary crossover.

So, with the books already having been covered, I now delve into my favourite graphic novels of the year. A post with the best single issues will follow on later.

Let’s see what makes the cut and which comes close then!

Best of the Best Graphic Novels

Red Sonja, the She-Devil with a Sword, intends to pay back a blood debt owed to the one man who has gained her respect… even if it means leading a doomed army to their certain deaths! Who is Dark Annisia, and how has this fearsome warrior accomplished what no god nor demon has been able to do: force Sonja to her knees in surrender?

An epic tale of blood, lust, and vengeance, Queen of the Plagues takes Red Sonja from the depths of her own grave to the heights of battlefield glory.

2. The Flash Volume 4: Reverse by Brian Buccellato and Francis Manapul

A mysterious and powerful Speed-Force killer has left a trail of bodies in his wake and only Barry has the power to stop him. But when the killer stays one step ahead of him, Barry finds himself face to face with the Teen Titans and Kid Flash for the first time. All this will lead to a confrontation with the Flash’s most deadly foe, The Reverse Flash!

Somewhere at the end of time, all the gods of the universe are enslaved, working to build a machine that will forever change the face of creation. What is…the Godbomb?

And what can Thor, the last free god in all the cosmos, do to stop it? As Gorr’s master plan continues to unfold, all hope for divinity is lost as Thor finds himself in chains alongside his fellow gods. As the clock ticks down on one very large bomb, as enslaved gods look to the skies for a savior, enter…the Girls of Thunder? 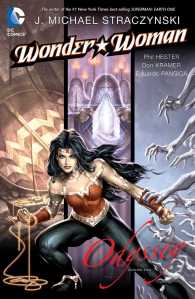 Due to mysterious circumstances, Diana must track down the truth behind what’s happened to her timeline and face the biggest stunner of all–Who or what destroyed Paradise Island? To add to her troubles, new versions of familiar foes are introduced as JMS’s run with the Amazon Princess comes to a close.

All bets are off in this all-new direction for the long-running series that’s perfect for new readers as Wonder Woman embarks on an odyssey to find her past and gets a new costume, a new set of foes and a new tone from the ground up! In this final “Odyssey” volume, Wonder Woman faces Cheetah, Silver Swan, Dr. Psycho and the mysterious Morrigan!

The event that the New 52 has been building towards since the beginning! #1 New York Times best-selling writer Geoff Johns (GREEN LANTERN, BATMAN: EARTH ONE) and multiple award-winning writer Jeff Lemire (THE NOBODY, ANIMAL MAN) bring together almost two years of plot threads here in JUSTICE LEAGUE: TRINITY WAR. When the three Justice Leagues go to war with one another, who’s side will everyone be on? Allies will be born, friends will become enemies and the DC Universe will never be the same.

This new hardcover graphic novel features stunning art from some of the best talents in the industry, including Ivan Reis (AQUMAN VOL. 1: THE TRENCH), Doug Mahnke (GREEN LANTERN VOL.1: SINESTRO) and Mikel Janin (JUSTICE LEAGUE DARK VOL. 1: IN THE DARK). 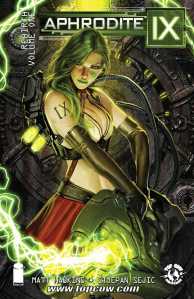 Hundreds of years after a cataclysmic event scorched the surface, Earth and its inhabitants have been forever altered and a new landscape and political struggle has taken hold between two distinct factions fighting for control.

Aphrodite IX is both anachronism and advanced technology in a world that she no longer recognizes. To survive in this future, she must choose sides in a war that she wants no part in.

The World Army has begun rounding up the Super Heroes of Earth 2, but for what dark purpose? In an attempt to avoid capture, Dr. Fate and Kid Flash find themselves in the powerful magical realm of Nabu, and Wotan, the protector of Nabu, seeks Dr. Fate’s assistance in obtaining a secret locked deep within a tower… 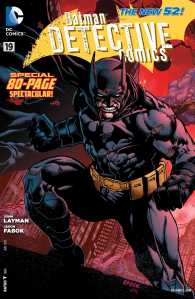 Note: Actual solicitation text for this is not available as yet.

#19: In a special oversized celebratory issue, Batman is challenged by the “Mystery of the 900!”

#20: The superhuman transformation of Ignatius Ogilvy is just the tip of the iceberg when an extremely unexpected character comes to The Penguin’s aid! And in the backup story, Emperor Penguin makes a trip to Blackgate Prison he won’t soon forget!

#21: Harper Row joins Batman on a case that leads all the way back to DETECTIVE COMICS #0, but will The Dark Knight be willing to accept her help? Illustrated by guest-artist Scot Eaton!

#22: Meet The Wrath! In Gotham City, he’s the anti-Batman, and the body count is about to shoot through the roof! And in the backup story, Man-Bat makes a startling discovery!

#23: Alfred is forced to confront the Anti-Batman known as the Wrath! Taking care of Batman all these years has left Alfred with more than a few tricks up his sleeve, but will they be enough?

#24: Batman’s final confrontation with The Wrath is here! Can Batman stop his evil counterpart from claiming any more victims as an epic battle bursts onto the city streets?

Legacy of the Magdalena Restored!

The Magdalena has been the official protector and warrior of the Catholic Church for over two thousand years, sworn to defend the Faith with the Spear of Destiny against all manner of supernatural threats. However, Patience, the latest Magdalena, has seen through the hypocrisy of her masters and struck out on her own. When her former mentor comes to her with a mission to destroy the Anti-Christ, will she be able to resist the call?

Eisner-winning team of Rucka and Lark’s critically acclaimed new series about Forever Carlyle, the Lazarus of the Carlyle Family.

In a dystopian near-future, government is a quaint concept, resources are coveted, and possession is 100% of the law. A handful of Families rule, jealously guarding what they have and exploiting the Waste who struggle to survive in their domains. Forever Carlyle defends her family’s holdings through deception and force as their protector, their Lazarus. Shot dead defending the family home, Forever’s day goes downhill from there…

Peter Parker spent a lifetime fighting to improve the world, but his story ended dramatically with a final, fatal sacrifice. Now, Peter’s arch-enemy Dr. Octopus has taken control of his body — and his life.

Otto Octavius is Spider-Man! And he’s determined to prove himself Superior to his former foe in every way. But his baptism of fire will come when he faces down the new Sinister Six!

Is the new Spider-Man in cahoots with J. Jonah Jameson? And has Carlie Cooper figured out his secret identity? Plus: Spider-Man and Mary Jane “reunited”! The return of the Vulture! And how many people must die before the Superior Spider-Man will kill a super villain? Find out as Otto battles Massacre, with hundreds of lives in the balance!

The year’s most anticipated blockbuster cosmic event arrives as the Marvel Universe marches into INFINITY!

Thanos makes his world-shattering return, and his armies fire the opening shots of a galactic war that will be fought both on Earth and in deep space — with our heroes caught between both battles! As the mad Titan’s secrets are revealed, the Inhumans’ city of Attilan falls, and the members of the Illuminati find themselves on the front line! And as every Origin Site on Earth goes active, the Builders enter the Marvel Universe.

But can the Avengers return to Earth in time to save it, when betrayal in the Galactic Council has left them prisoners of war? Galactic empires will fall as Thanos’ crazed plans come to fruition!

So that’s all for now. Just so you know, picking out these 12 titles took me almost 2 hours and putting together the entire post has taken up about another 3 hours or so. Finding all the right images, all the right links, the right blurb text, its exhausting! Hence why I prefer to do it in smaller chunks.

All in all, I read a total of 72 graphic novels last year (not counting story arcs that got released in 2013). So it could very well be up to a 100 graphic novels!

Check back soon for my list of top comic monthlies!